‘Was a WhatsApp forward’: Harbhajan Singh Apologizes For Paying Tribute To Khalistani Terrorist

Cricketer Harbhajan Singh has apologised after he faced mounting criticism for praising Khalistani terrorist Jarnail Singh Bhindranwale and others. 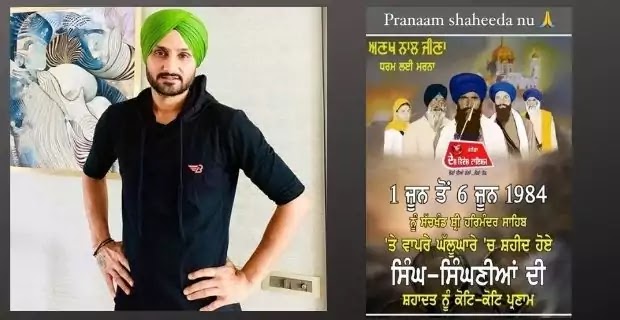 New Delhi: Cricketer Harbhajan Singh has apologised after he faced mounting criticism for praising Khalistani terrorist Jarnail Singh Bhindranwale and others in an Instagram story on Sunday.

In an explanation posted Monday,  Harbhajan Singh tweeted: “I just wish to clarify and apologise for an Instagram post yesterday. It was a WhatsApp forward that I posted in a haste…(sic).”

He continued that he does not support the views in the post and “will never support anything that is anti-India”.

My heartfelt apology to my people..🙏🙏 pic.twitter.com/S44cszY7lh

While some social media users called his mention of a WhatsApp forward a “silly excuse“, others wondered if he was “forced” to post it.

The image was followed by text in Punjabi that read: “Heartfelt tribute to those martyred in Operation inside Shri Harmandir Sahib on June 1- June 6, 1984.”

A legendary spin bowler, Singh made his ODI and Test debuts in 1998 and last served India in the 2016 Asia Cup T20 International where he played only one match against the UAE. He was also part of the IPL with Mumbai Indians for 10 seasons. He won three titles before being bought by Chennai Super Kings in 2018. He, however, opted out of the 2020 IPL in the UAE due to personal reasons.

In 2002, the Punjab government recommended the cricketer a post as deputy superintendent of police, but Singh never took up the offer.

The 40-year-old received flak online for praising a terrorist, with many calling his social media post “shameful” and others saying they have “lost respect” for him.

One Twitter user wrote: “So @harbhajan_singh not only praised a declared terrorist but praised someone who wanted India to be partitioned again & have killed Hindus in large number.”

So @harbhajan_singh not only praised a declared terroríst, but praised someone who wanted India to be partitioned again & have kÍlled Hindus in large number. Shameful!

India has been proud of his records, but here comes the reality check.#HarbhajanSingh pic.twitter.com/Js8ucPwSIt

“I used to cheer for @harbhajan_singh when I was a kid. Shame on me,” a Twitter user by the name of Rahul Kr. Sr. wrote.

I used to cheer for @harbhajan_singh when i was a kid. Shame on me. pic.twitter.com/OQteoSJoZE