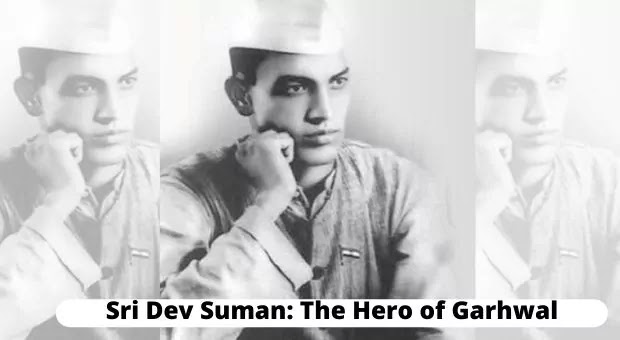 Born on 25 may 1916, in the village Jaul of Tehri Garhwal district of Uttarakhand, Sri Dev Suman was best known as a group leader of freedom fighters active in Tehri.

His father Shri Hari Dutt Badoni was a well known Vaidya ( Practitioner of Ayurveda ). His mother Shrimati Tara Devi was a housewife. Although  Suman’s real name was Shri Dutt Badoni however later on as he contributed in the revolution of freedom he was renamed as Sri Dev Suman.

He had his early education In Chamba and Tehri. In 1930 Sri Dev Suman was only 14 years old when he participated in “Namak Satyagraha” in Dehradun. And at that very time, he was arrested and sentenced to the imprisonment of 15 days in the Agra Central Jail. Where he wrote the following lines on our beloved motherland;

In his early life, he became a key organizer and agitator for civil rights in Tehri while serving as an editor and writer for several underground publications, such as “Suman Saurabh” etc. He started to fight for the freedom of Tehri Riyasat from the clutches of the King of Garhwal Bolanda Badri (Speaking Badrinath).

Sri Dev Suman was highly influenced by Mahatma Gandhiji and used a Non-Violence way for the freedom of Tehri. His friend's circle included respected environmentalists and people with specific excellence.

In that very time, there were many kinds of objectionable taxes incorporated on the poor subjects of Tehri Riyasat. One day Sri Dev Suman went to his mother and eyes filled tears and said “Maa, Please forgive me! Your son cannot provide you all the luxury and happiness of life as I am devoted to my motherland. Please allow me to live for those mothers who haven’t any child”.

Sri Dev Suman was one of the first proponents of the unification of Uttarakhand. He was invited as a representative of the hills; to a conference held in February 1939, which was presided by Pandit Jawahar Lal Nehru in Ludhiana.

At this meet, the atrocities that were inflicted on the poor people by the Garhwal Rulers were brought into the knowledge of Vijay Laxmi Pandit and Pandit Jawahar Lal Nehru. In 1942 Sri Dev Suman went to Wardha to visit Mahatma Gandhi Ji.

He was very keen to seek Blessings from his idol for the Praja-Mandal movement.  On returning to Tehri he was arrested by the soldiers of Garhwal who had been trailing him. He was barred to enter the Tehri state and was arrested every time whenever he tried to do so.

However the enthusiasm in his heart was constantly increasing, therefore he vowed to fight against the ruthless administrators even at the cost of his life.
On 27December1943 when he was trying to enter into the Kingdom of Tehri, he was arrested at Chamba.

He was declared a rebel of the state and imprisoned.  Inside the Jail heavy fetters were put on his body, disabling him from doing his daily Chores. And even with such tortures in his body, his food was not even eatable.

The Roti was prepared with a mixture of sand and clay, and the rest of the food was contaminated by grind pebbles. Mohan Singh was the in-charge of the jail and he never missed an opportunity to misbehave and torture Sri Dev Suman.

Then the courageous and devoted Sri Dev Suman decides to give up the food which was served to him by the cruel Administration. Consequently, the health of Sri Dev Suman deteriorated. The jail staff tried to feed him forcibly but all efforts of them brought no success.

Meanwhile, one night the mercury was low due to the winter and that worsened Suman's condition. Even though Sri Dev Suman’s health was not good; the jail staff hadn’t shown compassion towards him. His blanket happened to be soaked in cold water during the chilly winter nights that could have frozen our soul.

In that prison, Sri Dev Suman was anguished in many ways. On 3 May 1944, Sri Dev Suman started declining food and by July he was very critical. He was asked to give up his resolution and eat something for life.

Nevertheless, Sri Dev Suman was firm on his bold move as he believed that there is something more important than merely breathing. As his health worsened to the worst the doctors couldn’t help and they tried to inject the medicine through intravenous which subsequently became the reason for his death.

Being imprisoned for 209 days and not eating for 84 days ultimately caused him to breathe his last. He was an ideal son for his parents, a loving brother to his friends. Sri Dev Suman’s personality was as dynamic as his deeds which have shown his conscientiousness towards his convictions and beliefs.

This heinous act of jail authorities ultimately came into the knowledge and the people of Tehri went wild on his death.

He was a doctor by profession and Martyred only at the age of 29, leaving behind his wife and a legacy of inspiration for the people like us.

His Balidan Diwas (The Day of Martyrdom) is celebrated 25th of July. 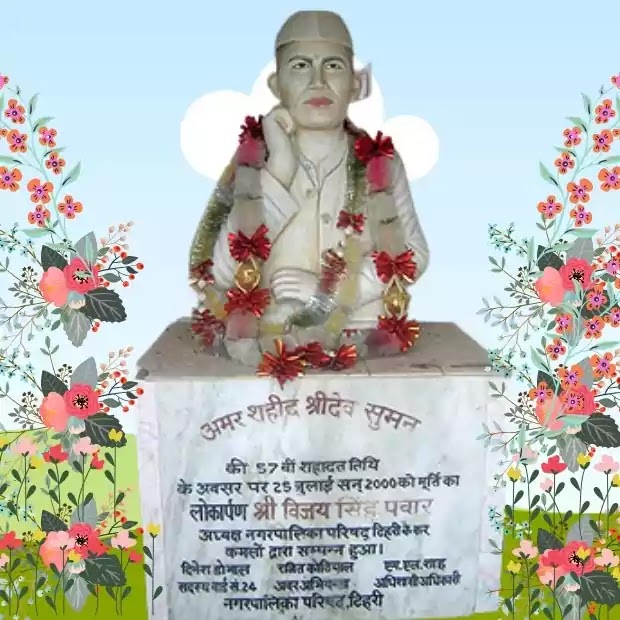