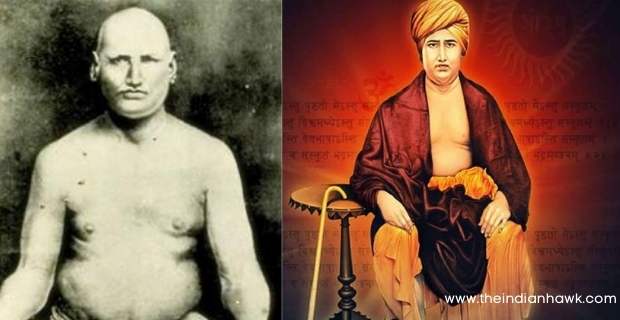 Who was Maharishi Dayanand Saraswati?

Maharishi Swami Dayanand Saraswati ji was born on 12 February 1824. He was a Brahmin by caste and he defined the word Brahmin by his deeds. A Brahmin is "one who is a worshiper of knowledge and a contributor who gives knowledge to the ignorant". Swamiji read Vedas and Upanishads throughout his life and benefited the people of the world with that knowledge.

He called idol worship futile. He described Vedic religion as the best in the form of God in the formless Omkar. In the year 1875, Swami Dayanand Saraswati founded the Arya Samaj. In the revolution of 1857, Swamiji made his invaluable contribution. He took a heavy blow from British rule and died on 30 October 1883 due to a conspiracy against him.

Swami Dayanand Saraswati believed in the Vedic religion. He always opposed the immoral practices and superstitions prevailing in the nation. He explained the importance of distinct direction and Vedic knowledge to society. He described the fruits of karma and karma as the basic principle of life.

He was a great thinker, he tried to distance society from religious fanatics with his ideas. It was a great patriot who gave the message of Swarajya, which was later adopted by Bal Gangadhar Tilak and gave the slogan of Swarajya is my birthright.
Many great sons of the country were inspired by the ideals of Swami Dayanand Saraswati Ji and only by following the path shown by them, did those sons give freedom to the country.

His initial name was Moolshankar Ambashankar Tiwari, he was born on 12 February 1824 in Tankara, Gujarat. It was from a Brahmin clan. The father was a rich man, so there was no curtailment of money in the family.

After an incident, his life changed and he chose the life of a monk in 1846, 21 years of age, and left his home. He had a strong desire to know the truth of life, due to which he was seen as meaningless in worldly life, that is why he did not say his marriage proposal.
There were many disputes between him and his father on this subject, but his father had to bow down in front of his strong desire and firmness. It was clear from their behavior that the art of opposing and expressing their views was inherent from birth. For this reason, he strongly opposed British rule and made the country aware of the Arya language i.e. Hindi.


How did Swami Ji's life change?

Swami Dayanand Saraswati's name was Moolshankar Tiwari, he was an ordinary man who always followed his father's words. Being a Brahmin by caste, the family was always engaged in religious rituals.
Once, on the occasion of Mahashivaratri, his father asked him to fast and worship him with the law and also observe the nightly fast. According to the father's instructions, Moolshankar followed the fast, fasted for the whole day, and sat in the Shiva temple with a palanquin for the night awakening.

At midnight, he saw a scene in the temple, in which a swarm of rats surrounded the idol of God and were eating all the prasad. Then the question arose in the mind of Moolshankar Ji, this idol of God is really a stone rock, which can not protect itself, what can we expect from it?
That one incident made a huge impact on the life of Moolshankar and he left his home for the attainment of self-knowledge through the knowledge, he made Maharishi Dayanand Saraswati from Moolshankar Tiwari.


Contribution to the Revolution of 1857:

After leaving the house in 1846, he first started speaking against the British, during his tour of the country, he found that people also have resentment against the British rule, they just need proper guidance, so they collected the people who Worked The great heroes of that time were also influenced by Swamiji, among them were Tatya Tope, Nana Saheb Peshwa, Haji Mulla Khan, Bala Saheb, etc. These people worked according to Swamiji.

After making the people aware, everyone was made the message bearer, so that mutual relations were formed and solidarity came. For this work, he also prepared the Roti and Kamal scheme and started connecting all for the independence of the country. He first connected the saints, so that through them, the common man can be motivated for freedom.

Although the revolution of 1857 failed, Swamiji did not have feelings of despair, he explained this to everyone. He believed that many years of slavery could not be met through a struggle, for this it may still take as much time as slavery has been cut. He assured me this is the time to be happy because the freedom struggle has started in a big way and the country will be free in the upcoming years.

His ideas kept the spirits of the people alive. After this revolution, Swamiji went to his Guru Virjanand and started acquiring Vedic knowledge and communicated new ideas in the country. On the guidance of his Guru, Swamiji did the work of social salvation.


Importance of Guru in life:


In search of knowledge, this owner met Virjanand Ji and made him his guru. Virjanand got them to study the Vedic scriptures. Gave him knowledge of yoga science. After receiving knowledge from Virjanand Ji, when Swami Dayanand Ji asked him about Guru Dakshina, Virjanand asked him to work for social reforms, working against the evil practices prevailing in the society, eradicating superstition, bringing the importance of Vedic scripture to people, philanthropy is religion.
Its importance was tied up in difficult resolutions like explaining it to everyone and called this resolution his Guru Dakshina.

After getting guidance from the Guru, Swami Dayanand Saraswati started touring the entire nation and spreading the knowledge of Vedic scriptures. He faced many adversities, and was humiliated, but never changed his course.

He studied the original texts of all religions and openly opposed the evils prevailing in them. They were opposed to Christianity, Muslim religion, and Sanatan religion too. He considered the knowledge contained in the Vedas to be paramount and certified. He established the Arya Samaj with his core values.


In the year 1875, he founded the Arya Samaj in Mumbai on the day of Gudi Padwa. The main religion of the Arya Samaj was human religion. He described philanthropy, human service, karma, and knowledge as the main basis whose purpose was mental, physical, and social progress.
With such thoughts, Swamiji laid the foundation of Arya Samaj, which inspired many great scholars. Many opposed Swamiji, but no one could stand before his logical knowledge. Great scholars and pandits had to bow before Swamiji. Similarly, in the darkness of superstition, the feeling of Vedic light was beginning to be felt by everyone.


For the purpose of Vedic propaganda, Swamiji used to give lectures in every part of the country, due to the severe Sanskrit style, his style was the Sanskrit language. Since childhood, he started reading and understanding the Sanskrit language, so he had no problem with reading Vedas.
Once he went to Calcutta and met Keshav Chandra Sen there. Keshav Ji was also influenced by Swamiji, but he gave a suggestion to Swamiji that he should not give his lecture in Sanskrit and give it in the Arya language i.e. Hindi so that his ideas could reach the scholars as well as ordinary people.
Then in the year 1862, Swamiji started speaking in Hindi and resolved to make Hindi the mother tongue of the country. It was only after the Hindi language that Swamiji got many followers, who adopted his ideas. Aryasamaj was the most supported in Punjab province.


Opposition to the immoral practices prevalent in society and the lesson of unity:


Maharishi Dayanand Saraswati considered himself responsible for society and therefore raised his voice against the evil practices and superstitions prevailing in it.

At that time, the practice of child marriage was prevalent everywhere, and everyone was glad to follow it. Then Swamiji aroused the people against this practice through the scriptures.
He explained that it is mentioned in the scriptures, that 25 years of advancement in human life is of brahmacharya, according to which child marriage is a misdemeanor. He said that if child marriages take place, those human beings become weak and premature death is achieved due to weakness.

He also opposed the inhuman practice of devoting the fire to the wife along with her husband and died on Shaya and taught the human race a sense of love. Gave a message of charity.

Then, Lewdness was prevalent in the country, which is still a part of the country. The level of widow women is still struggling in the country. Dayanand Saraswati Ji condemned this very thing and even in those days, respecting the women, gave their vote for remarriage and made people aware of it.

The message of unity:

It was a dream of Dayanand Saraswati Ji, who is incomplete to date, he wanted to see all religions and his followers sitting under the same flag.
They believed that the third always takes advantage of mutual fighting, so it is necessary to remove this distinction. For he led many meetings but he could not put Hindu, Muslim, and Christian religions in one garland.

He always said that the scriptures are not the words of variance, but the varna system, according to which the four varnas are integral only to the smooth functioning of the society, in which no one is small but all are priceless. He spoke of giving equal rights to all classes and opposed the varna.

Swamiji always supported women's power. He believed that women's education is the development of society. He called women the basis of society. He said that in every area of ​​life, discussions with women are necessary, for which they must be educated.


The British government had started to fear Swami Ji. Swamiji's statement had a profound impact on the country, which he was seeing as his defeat, so he started constantly monitoring Swamiji. Swamiji had never given up in front of the British Government and his officer, but he had to face sarcasm, due to which the British Government began to doubt Swamy's power in front of him and due to this his efforts were made to assassinate him.
Swami Ji was poisoned many times, but Swami Ji was proficient in yoga and therefore nothing happened to him.


In 1883 Swami Dayanand Saraswati went to the Maharaj of Jodhpur. King Yashwant Singh received him with great respect. Heard many of his lectures. One day when King Yashwant was busy with a young dancer, Swamiji saw all this and because of his spastic pleasures, he opposed it and in a calm voice explained to Yashwant Singh that on one side you want to join religion and on the other, On the other hand, there are hugs with such luxury, in such a way it is impossible to get knowledge.

Swamiji's words had a deep impact on Yashwant Singh and he ended his relationship with his little life. Due to this, the young dancer tuned enraged with Swamiji and along with the Cook, she mixed pieces of glass in Swamiji's food, which deteriorated Swamiji's health. Treatment started at the same time, but Swamiji was not relieved.

The Cook accepted his guilt and apologized. Swami Ji forgave him. Later Swamiji was sent to Ajmer on 26 October 1883, but his condition did not improve and he left this us on 30 October 1883. 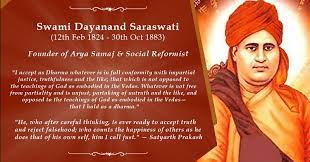 In his 59 years of life, Maharishi Dayanand Saraswati woke the people against the evils prevailing in the nation and spread the new light in the country with his Vedic knowledge. As a saint, he had the power of deep sarcasm with calm speech, and his fearless nature communicated Swaraj in the country.