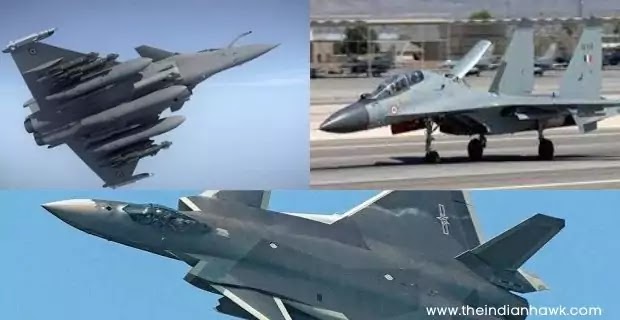 The Indian Air Force will soon be equipped with state-of-art Rafale Fighter Jets which will be stationed at Hasimara Air Base while China already has 5th generation Chengdu J-20 jets. This analysis is about how the Rafale Fighter Jets and SU-30MKI can compete against Chinese J-20 or J-10 Fighter jets.

As reported earlier, the Indian Air Force officers in Hasimara have written to the defense ministry seeking clearance to relay the runway and build a hangar to accommodate both SU-30MKI and Dassault Rafale fighter jets.

The SU-30MKI is the most advanced fighter jets in the Indian armory who will now be complemented by the highly controversial, but competent – Rafale fighter jets. So, what will happen, when Chengdu J-20, the fifth-generation fighter jet comes face to face with Rafale jets?

Chengdu J-20: It is a single-seat, multirole stealth fighter for air-to-air, air-to-ground combat roles with supersonic cruise speed and integrated avionics which was test flown for the first time on January 11, 2011. 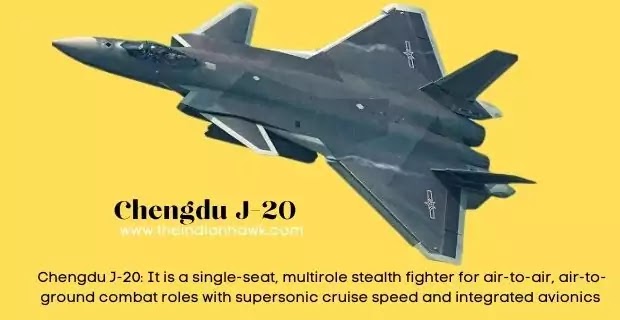 While the J-20 is currently powered by the Russian AL-31 engines, China is working in a new and more powerful WS-15 (Emei) afterburning turbofan engine for the fighter for sustained supersonic speed. The aircraft can fly at a maximum speed of 2,100 kilometres per hour (about 1.8 mach) and its climbing rate is 304 metres per second.

There are two lateral bays with four hardpoints each for air-to-air missiles while the fuselage has a larger bay under it for carrying missiles and other weapons. It also has an internal cannon. It is equipped with an AESA radar along with a chin-mounted infrared/electro-optic search and track sensor.

The Chinese also claim that the J-20 has a passive electro-optical detection system which gives the pilot 360° coverage. The fighter, which has a glass cockpit with a bubble-shaped canopy, can access real-time data from Chinese military satellites, Divine Eagle anti-stealth Unmanned Aerial Vehicles and other airborne early warning and control (AEW&C) systems. The J-20 cockpit has two liquid crystal displays (LCD) and a head-up display (HUD). The J-20 can be operated through the traditional hands-on throttle and stick (HOTAS) system.

Sukhoi Su-30 MKI: The IAF’s twin-seater multirole fighter aircraft is the product of an Indo-Russia joint venture between Sukhoi Design Bureau and Hindustan Aeronautics Limited (HAL). The Su-30 MKI is 21.9 metres long, 6.4 metres high and has a wingspan of 14.7 metres. The maximum take-off weight is 38,800 kg. 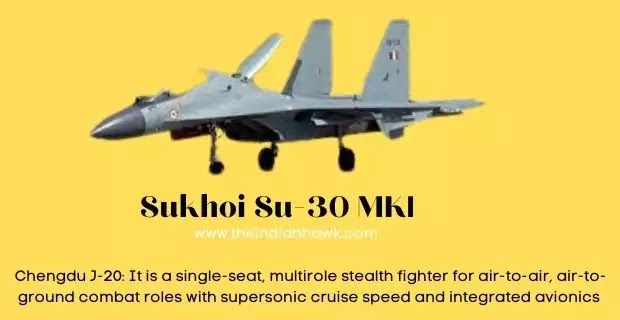 At present, the Su-30 MKIs have an N011M PESA radar which will soon be replaced with the more advance Zhuk AESA radar. The aircraft also has OLS-30 laser-optical locator system and Litening target designation pod to guide air-to-surface missile and laser-guided munitions.

The Su-30 MKI is one of the most heavily armed fighters in the world today. The IAF has modified 40 Su 30 MKIs to carry the supersonic BrahMos cruise missile. The fighter has a 30mm Gsh-30-1 cannon and 12 hardpoints capable of carrying missiles and bombs. The plane also has Tarang radar warning receiver and jammers for electronic warfare. 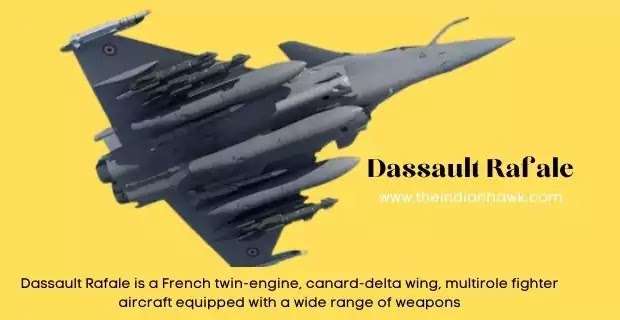 The Rafale is fitted with two Snecma M88 engines, each capable of providing up to 50 kN (11,250 lbf) of dry thrust and 75 kN (16,900 lbf) with afterburners. The M88 enables the Rafale to supercruise while carrying four missiles and one drop tank.

Although not really a stealth aircraft (as Chengdu J-20 claims), the Rafale was designed for a reduced radar cross-section (RCS) and infrared signature, which means it has some stealth features, which have neither been exaggerated neither been over-hyped.

The Rafale core avionics systems employ integrated modular avionics (IMA), called MDPU (modular data processing unit). The total value of the radar, electronic communications and self-protection equipment is about 30% of the cost of the entire aircraft, which is noteworthy.

The Rafale features an integrated defensive-aids system named SPECTRA, which protects the aircraft against airborne and ground threats. Various methods of detection, jamming, and decoying have been incorporated, and the system has been designed to be highly re-programmable for addressing new threats.

China’s People’s Liberation Army Air Force (PLAAF) deployed its latest fighter Chengdu J-20 in February 2018 claiming it has stealth and is the most advanced fighter plane in all of Asia and comparable only with the American F-22.

However, according to various media reports, the Indian Air Force main fighter jet – the Sukhoi Su-30 MKI was able to detect the Chengdu J-20 flying over Tibet despite the latter using stealth technology. These claims can never be verified, but one thing is certain that Chengdu J-20 has question marks over its stealth technology and has no proven capabilities in a war.

The Chinese might have thoroughly evaluated the Indian SU-30 MKI jets, as they have jets based on similar Russian technology, but the French Rafales would be a complete surprise.

The Rafales, as stated earlier by EurAsian Times have invested around 30% of the cost of the entire aircraft on the radar and self-protection equipment which would make it extremely difficult to detect and shoot-down. That was one of the reasons why India preferred the French Rafales over the very advanced F-16s and Typhoons.

The French 4.5 Generation Fighter Jets, with proven war capabilities and tried and tested weaponry and radars has the potential to completely surprise the Chinese 5th generation fighter jets, which is still in the upgradation stage. It is highly unlikely that China will bring its J-20 face to face with the Rafale Fighter Jets anytime soon until they are self-assured of its capabilities.