Defence Minister Rajnath Singh on Monday released a compendium of 20 reforms undertaken by the ministry in the past 12 months. 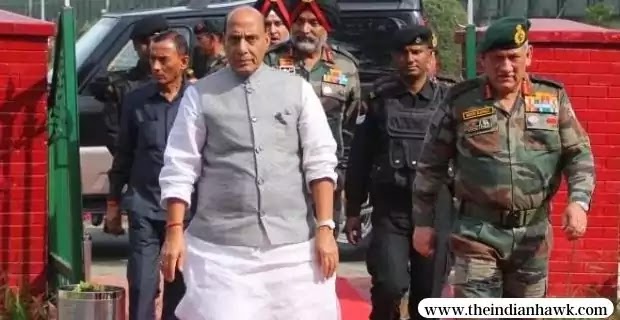 Defence Minister Rajnath Singh on Monday released a compendium of 20 reforms undertaken by the ministry in the past 12 months that includes steps to make India a military-industrial power.

India's defence exports rose from ₹1,941 crores in 2014-15 to ₹9,116 crores in 2019-20, a statement from the defence ministry said adding that for the first time, "India figured in the list of defence equipment exporting nations, as the exports expanded to more than 84 countries.""The booklet is a reflection of the resolve of the Government, under the able leadership of Prime Minister Narendra Modi, to make the defence sector stronger and more efficient," Singh said at an event on the occasion.

"The compilation provides a brief overview of defence reforms undertaken in the year 2020 by MoD (Ministry of Defence) to bring about greater cohesion and modernisation of the Armed Forces through policy changes, innovation and digital transformation," the statement from the ministry said.

"The reforms also focused on the ‘AatmaNirbhar Bharat’ (self-reliance) initiative of Prime Minister Narendra Modi; increased collaboration with the industry to boost defence exports; measures to accelerate defence acquisitions with greater transparency; digital transformation; strengthening of border infrastructure; increased participation of women in Armed Forces; transformation in R&D to boost innovation; expansion of NCC (National Cadet Corps) to remote locations and aid extended to the civil administration in the fight against covid-19," the statement said.

The statement highlighted the creation of the post of chief of defence staff and the appointment of India’s first Chief of Defence Staff (CDS) as one of the major reforms.

"The post of CDS was created to increase efficiency and coordination among the Armed Forces and reduce duplication, while DMA (Department of Military Affairs) was established to ensure improved civil-military integration. General Bipin Rawat was appointed as the first CDS who also fulfils the responsibilities of Secretary, DMA," it said.

Self-reliance in defence was another of the reforms highlighted by the statement.

"To promote ‘Make in India’ in the defence sector, a list of 101 defence items was notified in August 2020, while Defence Acquisition Procedure 2020 was unveiled in September 2020. ₹52,000 crore budget was earmarked for indigenously made defence equipment in 2020-21. The corporatisation of the Ordnance Factory Board (OFB) was approved in May 2020 for greater efficiency and productivity. There was an unprecedented push towards new technology development within India," it said.

Increased efforts at modernisation and transparency in the acquisition of weapon systems were also highlighted as a key reform.

"In highest-ever thrust towards modernisation in last 10 years, there was 10 % budget increase in 2020-21 over the previous year. Policy reforms for increased transparency included the launch of the new Defence Acquisition Procedure in September 2020 and the revision of the DRDO Procurement Manual in October 2020.