Immediately after the explosion, the police checked the CCTV cameras in the vicinity to ascertain the sequence of events, officials said 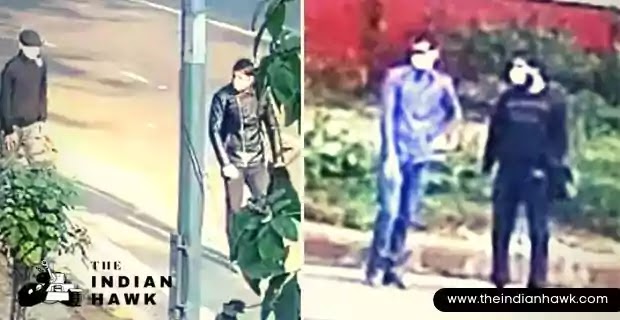 The National Investigation Agency (NIA) on Tuesday released visuals of two men suspected to be involved in a blast near the Israel Embassy in Delhi in January this year.

Placing a reward worth ₹10 lakh for information leading to the arrest of each suspect, the investigative agency said it is seeking help to identify and arrest the two individuals seen to be roaming near the spot on the day of the attack.

According to the police, the low-intensity improvised device went off around 5pm near 5, APJ Abdul Kalam Road near Jindal House. No injury to any person and nor any damage to property was witnessed except window panes of three vehicles parked nearby, officials said.

#WATCH | CCTV footage of suspects in a blast that took place on January 29th outside the Israel Embassy in Delhi.

Immediately after the explosion, the police checked the CCTV cameras in the vicinity to ascertain the sequence of events, officials said. Forensic experts of Delhi Police are at the spot to lift the samples of the explosive.

Preliminary investigations from February had revealed no connection with a suspicious package found outside the Israeli embassy in Paris on the same day.

Forensic experts had ruled out any traces of PETN (pentaerythritol tetranitrate) in the Improvised Explosive Device (IED), which was fitted in a beverage can and was attached with a tiny timer before it was placed near a palm tree on the pavement at Abdul Kalam Road. “Experts have opined that the PETN, even in small amounts, would have caused a much bigger impact at the blast site,” said an officer, requesting anonymity.

Unfortunately for agencies, there is no eyewitness who saw anyone placing the IED near the pavement.

In its First Information Report (FIR), reviewed by HT, the probe agency said: “the blast caused a crater near the palm tree”.

According to the FIR, “Information was received at 5.20 pm in the office of Special Cell (Delhi Police) that a blast has occurred nearby. On the visit of the Special Cell Inspector, a post-blast crime scene was found near Jindal House, Bungalow Number 5, Dr A P J Abdul Kalam Road. A crater due to an IED blast was found near the palm tree on the pavement. Due to the impact of the explosion, windows of three cars (Hyundai Creta, Ford Ecosport and Maruti WagonR), which were parked on the opposite side of the road, were found shattered.”

"Several IED components were found scattered nearby the explosion spot. An envelope folded inside a closed poly pack was also found at the spot," it added.

The government termed it a terrorist act and handed over the probe to NIA due to “international implications”.

Agencies are confident about Iranian hand the terror attack – primarily due to three reasons – “29th anniversary of India-Israel’s diplomatic relation; letter left at the site seeking to avenge the killings Iran Quds Commander Qassem Soleimani, and Abu Mehdhi Al Muhandis, who were killed in a US drone attack in January 2020, and Iranian nuclear physicist Dr Mohsen Fakhrizadeh, who died in a car bomb attack in Iran in November 2020; and Iran-Israel’s known bitter relations, “ as explained by a second officer cited above.