In addition to the existing 10 laboratories, 18 more labs have also been approved for incorporation in the INSACOG network. 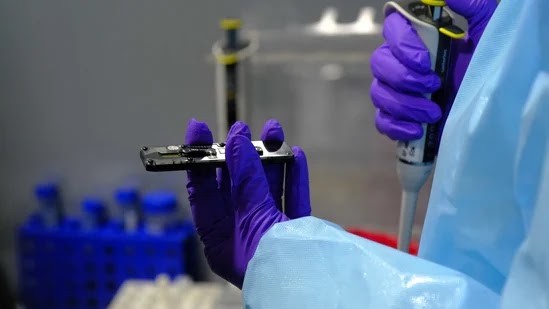 The Centre on Tuesday dismissed the media reports alleging a low quantum of sequencing in the country and significant lags between sample collection and sequence submission into a database for pattern detection and actionable alerts. It said Indian SARS-CoV-2 Genetics Consortium (INSACOG) has helped in the detection of Covid-19 Variants of Concern (VOC) in real-time, which was also shared with the relevant states. The present turnaround time for VOCs is only 10 to 15 days.

In addition to the existing 10 laboratories, 18 more labs have also been approved for incorporation in the INSACOG network, the government said on enhancing the number and capacity of genome sequencing.

The Centre clarified that a sampling strategy is developed based on the country's objectives, scientific principles and World Health Organisation (WHO) guidelines.

Accordingly, in view of rising Covid-19 cases, the existing capacity of RGSLs and timely detection of the VOCs including other variants, the strategy was revised to “Sentinel Surveillance” on April 12, the government said.

The strategy was also endorsed by the WHO, the government claimed. Under the present Sentinel surveillance strategy, states have identified five labs and five tertiary hospitals each as sentinel sites for sending samples to designated RGLS. Each of the sites sends 15 samples routinely for WGS to the designated labs.

"In addition to the sentinel surveillance, and additional event-based surveillance for special/unusual events like large clusters, unusual clinical presentation, vaccine breakthrough, suspected reinfections etc to detect, investigate and respond to these was also approved," the Union ministry of health and family affairs informed. This is in line with the revised objectives of INSACOG.

INSACOG is a forum established under the ministry on December 25 to study and monitor genome sequencing and virus variation of circulating strains of Covid-19 in India.

Initially, sampling was done to identify international travellers who could be carriers of new strains and to find out if the variants are already present in the population.

A two-pronged strategy was adopted later, as per which, international passengers arriving from selected countries and their contacts were targeted for genome sequencing and community-based sampling of 5% of the RTPCR positive cases from each state was done.

"It is important to note that the 5% norm was selected based on the then daily new caseload (10,000-15,000 per day) and the sequencing capacity of the RGSLs at that time," the government explained.

The government said both these objectives were achieved when it was conclusively established that international passengers were carrying the mutant strains and their transmission has also been established in the community (UK variant) in a few states.