According to the top Indian military and intelligence officials, while the PLA has withdrawn its military infrastructure from Pangong Tso finger area. 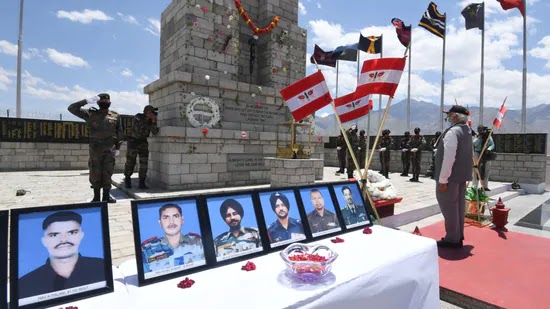 One year after Lt Colonel B Santosh Babu and 19 other braves of the Indian Army lost their lives in brutal fisticuffs with aggressive People’s Liberation Army (PLA) at patrolling point 14 in Galwan River Valley, the situation in East Ladakh remains in tenterhooks with the Chinese army delaying the agreed de-escalation process in East Ladakh.

Although the official figure of Chinese casualty in the Galwan skirmish will never be made public by Beijing, the Cabinet Committee on Security ministers of the Narendra Modi government is clear that the PLA numbers were much than the Indian toll.

According to the top Indian military and intelligence officials, while the PLA has withdrawn its military infrastructure from Pangong Tso finger area to nearby headquarters at Rudog, the PLA military posture on patrolling point 15 A and 17 A or what is called Gogra-Hot Springs remains the same with the Chinese not restoring April 2020 status quo ante around Kong Ka La area. Besides this, the 2013 Depsang Bulge legacy issue is still to be addressed with the PLA blocking Indian patrols to patrolling points 10 to 13 in the area south of the Daulet Beg Oldi sector.

The matters stand further complicated with the PLA inducting another division strength formation from the Xinjiang area for the annual military exercises that start around April and end around June every year. The ground exercises are coordinated with air defence war games and this time the Chinese air force flew J-11 and J-17 fighters to test their reaction capabilities.

“While the PLA have still deployed more than two divisions along with artillery, armour and rocket support elements since the May 2020 transgression, the Indian Army is watching whether the additional division inducted for exercises goes back to its bases in Xinjiang post-June,” said a government analyst.

A Cabinet minister confirmed to Hindustan Times that the situation in East Ladakh continues to be tense but under control with the fear that any accident akin to Galwan skirmish could lead to a horizontal flare-up between the two deployed armies. “The Chinese have still not agreed to dates to the 12th round of military talks to defuse the Gogra-Hot Springs situation as they want the issue to be settled locally. The forces are deployed on both sides and the PLA is rapidly building the military infrastructure behind the Line of Actual Control (LAC) from Karakoram Pass in Ladakh to Kibuthoo in Arunachal Pradesh. The situation can go south at any moment and hence we have to be prepared,” he said.

A senior analyst believes that the Xi Jinping regime may time the Gogra-Hot Springs resolution with the 13th BRICS summit, hosted by India later this year and feel the PLA posture will remain the same till Beijing celebrates 100 years of the Chinese Communist Party (CCP next month.