Launch of VIKRAM-S Suborbital Flight (PRARAMBH Mission): private sector of India prepares to compete in the space race by breaking the ISRO monopoly.

The monopoly held by the Indian Space Research Organization(ISRO) will disappear as the private sector of India prepares to compete in the space race. 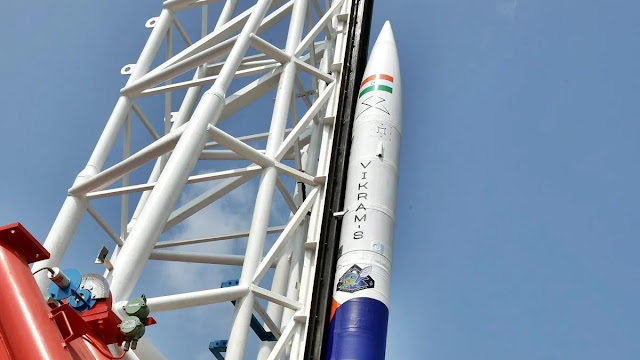 The first homegrown firm will do so from the ISRO's launch pad in Sriharikota on Friday when Skyroot Aerospace launches its first privately developed rocket, the Vikram-S.

Three commercial payloads will be sent into space on the rocket.

It will be a brief (300 seconds) sub-orbital test launch.

The rocket, a single-stage spin-stabilized solid propellant one with a mass of 500–550 kilograms, is scheduled to be launched as part of the "Prarambh" (the beginning) mission. It is expected to travel up to an altitude of 101 kilometers before crashing into the ocean. Rockets typically travel at a speed of 8 km/s.

NASA considers everything farther than 80 kilometers to be space. However, Skyroot co-founder Pawan Kumar Chandana told TIH that the test trip will be considered successful "even if we surpass 50 miles from sea level." "This mission demonstrates the efficacy of our technology. With this, 80% of the technology will be demonstrated. The work will begin on Friday at 5 a.m., and depending on the weather, the launch will occur between 11 and 11.30 a.m.

In order to increase private sector involvement in the full spectrum of space activities, the Narendra Modi cabinet approved reforms in the space sector in June 2020. This inspired ISRO to collaborate with emerging, commercial space-tech firms like Skyroot Aerospace in order to make space more accessible to a wider range of participants.

The first startup to sign a memorandum of understanding with ISRO was Skyroot Aerospace. Thermal images, optical cameras, radar imaging, and multi spectrum cameras that would convey pictures from space would be useful to the telecommunications, agricultural, weather forecasting, defense, and financial services industries. Around the world, there are close to 30,000 satellites that orbit the planet or are engaged in other space operations.

There it is!
Catch a glimpse of our Vikram-S at the rocket integration facility at Sriharikota, as it gets ready for the momentous day. Weather seems great for the launch on 18 Nov 11:30 AM.#Prarambh #OpeningSpaceForAll pic.twitter.com/b0nptNlA1N

India is already among the top five spacefaring nations in the world thanks to ISRO, although its commercial market share is only 2%.

The authorities announced a launch window between November 12 and 16 last week. Based on the weather, the actual launch date was later confirmed.

Due of the commercial opportunity, Chandana and Daka decided to manufacture rockets instead of satellites. Daka, who is also a co-founder of the company, stated that there are more than 500 satellite companies of note, but just 5-10 rocket companies globally.

Skyroot is reducing launch costs by 50% compared to top global players by utilizing a strong India ecosystem connection, adopting innovative and digital manufacturing processes (first-of-their-kind advanced 3D printing techniques), and making the best use of materials (over 15+ advanced materials, including the use of high-strength carbon fiber composites in rocket manufacturing). Due to this, India will become a key hub for all private participants in many industries to access private space launch vehicles and launch their own satellites that are specifically designed for their needs and for monitoring purposes.

In Hyderabad, Skyroot Aerospace has conducted ground trials; nevertheless, Friday's launch will be considerably more significant. The initial few vehicles' parts were mainly imported, but as time went on, important local partners helped produce unique cars here at home. As time goes on, partners like Solar India and Anant Tech will produce the majority of components like propulsions, avionics, structures, or actuators in India, according to Chandana.

Under the manufacturing programs of the ISRO or Defense Research Development Organization, 80% of polar satellite launch vehicles are being produced locally.

"Space is as important to national security as energy. The UK satellites of Bharti OneWeb were taken prisoner by Russia after western sanctions were placed on them, which caused a delay in their launch. OneWeb's schedule was hampered when Russian refused to launch UK satellites, according to a business executive who wished to remain anonymous. Therefore, it is absolutely essential to manufacture and launch in India, and private capital can be very helpful.

According to S Somanath, secretary at the Department of Space and chairman of ISRO, "The Indian Space Policy in Works will look at how to enable non-government entities to work in the space sector," he added, adding that the department's duty is to empower new actors.