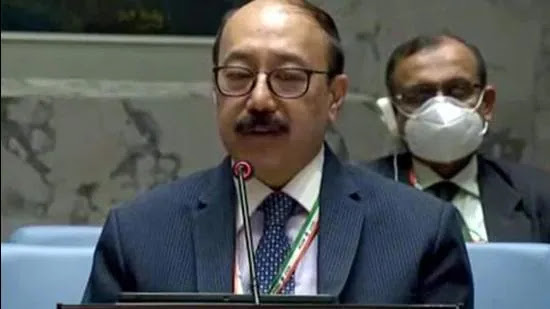 Foreign Secretary Harsh V Shringla said India has made it clear to China that peace and calm in border areas are vital for the growth of the two nations' relationship, adding that Afghanistan and China remain a traditional security issue.

According to him, the growth of India-China relations can only be built on the "three mutuals" of mutual respect, mutual sensitivity, and shared interests. Among the usual security issues, Shringla mentioned the stalemate with China and the situation in Afghanistan.

"The situation in our neighbourhood, notably in Afghanistan, and on our eastern borders with China reminds us that, while new realities are emerging, classic security concerns persist," he added.

In addition, the foreign secretary stated, "We've made it plain to the Chinese side that maintaining peace and tranquillity in border areas is critical to our relationship's growth. The growth of the India-China relationship can only be built on the "three mutuals" of mutual respect, mutual sensitivity, and shared interests."

"The agreement between the two nations to preserve peace and calm in the border areas has been an essential underpinning for the generally good trajectory of India-China ties over the last 40 years," he said.

After protracted military and political discussions, India and China retreated from the most disputed Pangong lake area last month, ending a military stalemate that had lasted almost a year.

Chinese attempts to unilaterally alter the status quo in Ladakh over the last year, according to Shringla, have significantly disrupted peace and tranquillity in the border areas.

"Chinese attempts to unilaterally change the status quo in Ladakh over the last year have significantly disrupted peace and tranquillity in the border areas. These actions are against our bilateral agreements and have unavoidably damaged other parts of our partnership "Added he.

Even more than a year after the Galwan incident, tensions over the India-China border in eastern Ladakh persist. On the margins of the Shanghai Cooperation Organization last week, External Affairs Minister S Jaishankar met with his Chinese colleague.

Jaishankar informed him that progress in the eastern Ladakh disengagement process is critical for the restoration of peace and tranquillity, as well as the growth of overall ties. Jaishankar also encouraged his Chinese counterpart to lead by example by demonstrating Asian unity.

Foreign Secretary Shringla said of Afghanistan, "India is also keeping a close eye on developments in Afghanistan's humanitarian situation. According to the UNDP, Afghanistan faces an urgent threat of growing poverty levels. There is also the possibility of a severe drought and a food shortage."

He believes it is critical that humanitarian relief organizations have unfettered and direct access to Afghanistan.

"It's also critical that humanitarian help is distributed in a nondiscriminatory manner to all segments of Afghan society," he added.