The first user trial of the nuke-capable intercontinental-range ballistic missile (ICBM) Agni-V missile is slated to take place in India, signalling its early admission into the armed services.

The Strategic Forces Command of the Indian Army has begun extensive preparations for the mission off the coast of Odisha. The 5,000-km range missile is expected to be flight-tested on September 23, according to a schedule obtained.

Originally scheduled for induction in 2020 following a hat-trick of pre-induction testing in 2018, the procedure was apparently pushed back due to the Covid-19 epidemic, which disrupted several key tests of the Agni-V missile's numerous independently targetable re-entry vehicles (MIRV). 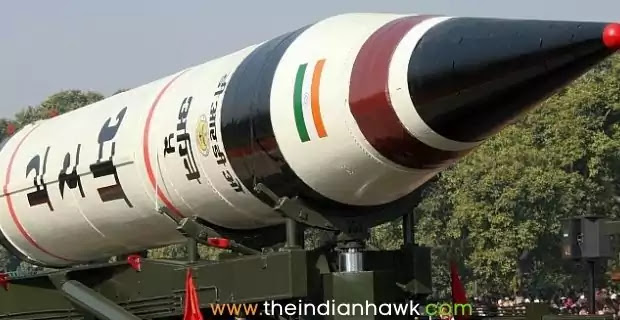 On June 28, the three-stage solid-fuelled missile was launched with several independently targetable re-entry warheads with improved navigation and next-generation propulsion.

According to defense sources, the upcoming Agni-V missile experiment is significant because it might be outfitted with the MIRV, which can carry multiple warheads. Although the missile's MIRV capabilities were surreptitiously tested during a multi-satellite launch, no live launch has yet taken place.

“The indigenous MIRV technology was successfully tested in the Agni P missile for the first time, with the weapon delivering two manoeuvrable warheads at two distinct places.

According to the sources, Agni-MIRV V's capabilities will provide India with much-needed deterrence.

While single-warhead missiles are typically launched against a single target, MIRVed missiles may fire multiple warheads at the same time. The technique will reduce the number of missiles needed, giving the military advantage in war readiness.

The induction procedure for the most powerful game changer Agni-V Missile has begun, according to a senior defence official, and a successful user trial will clear the door for serial manufacturing.

The Agni-V missile, which was developed by the Defence Research and Development Organization (DRDO), is capable of reaching targets in all Asian countries as well as sections of Africa and Europe.

The 17-metre long, 2-metre wide, three-stage, solid-fuelled missile can carry a payload of 1.5 tonnes and weighs approximately 50 tonnes and has a wire length of around seven kilometres.

After the United States, the United Kingdom, Russia, China, France, Israel, and North Korea, India is the eighth country to have intercontinental ballistic missiles.

Agni-V Missile, India's sole intercontinental ballistic missile (ICBM), has a range of 5,000 kilometres and can be readily expanded to 8,000 kilometres. This deadly Agni-V missile is a three-stage solid-fueled missile that can carry up to ten Multiple Independently Targetable Reentry Vehicles (MIRVs) (MIRVs).
The missile is 17.5-20 meters long, 2-2.2 meters broad, and weighs 49,000-55,000 kg when launched.
The Agni-V missile is transported by a road-mobile truck, enabling quick deployment across the country. Before moving on to user testing with the Army, the missile was said to have been tested more than seven times.