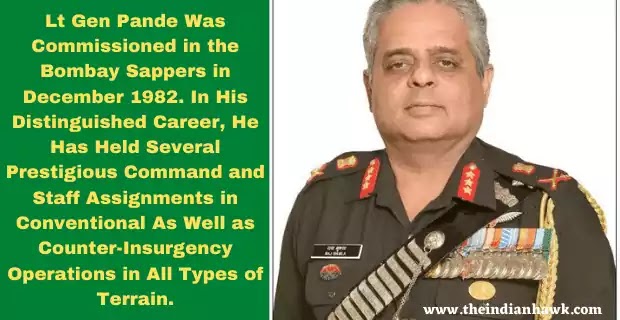 Lt Gen Manoj Pande will take charge as the new commander of the operationally crucial Eastern Army Command that takes care of guarding the Line of Actual Control (LAC) with China in the Sikkim and Arunachal Pradesh sectors.

In another important appointment, Lt General Ajai Singh will take charge as the 16th Commander-in-Chief of the Andaman and Nicobar Command (CINCAN) which is India's only tri-service theatre command, officials said.

Lt Gen Pande was commissioned in the Bombay Sappers in December 1982. In his distinguished career, he has held several prestigious command and staff assignments in conventional as well as counter-insurgency operations in all types of terrain.

He commanded an engineer regiment along the Line of Control during operation Parakram in Jammu and Kashmir, an engineer brigade in the western sector, an infantry brigade along LoC and a mountain division in high altitude area of western Ladakh and a Corps in the North East.

Lt Gen Pande will be the senior-most Army commander when Army Chief Gen MM Naravane retires from service next year.

Lt Gen Singh is an Armoured Corps officer. He was commissioned into the 81 Armoured Regiment in December 1983. The officer has served in various positions across all six of the Army's geographical Commands as well as at the Army Training Command. He held several sensitive positions at the Army headquarters including as the additional director general at the Military Operations Directorate, director general of financial planning and director-general of military training.

Lt Gen Singh has authored three key studies. These include the initial draft of the Army's "Land Warfare Doctrine, 2018", the "Army HQ Re-organisation Study, 2019" and an important Operational Study concluded in 2020.