Rockets fired from gaza being intercepted by the israeli iron dome air defence system. It appeared that the rockets were hitting an invisible shield.

In the conflict between Israel and Palestine, both sides have taken to air strikes and rocket attacks. On Tuesday evening, videos on social media showed rockets fired from Gaza being intercepted by the Israeli Iron Dome air defence system. It appeared that the rockets were hitting an invisible shield.

What is the Iron Dome?

It is a short-range, ground-to-air, air defence system that includes a radar and Tamir interceptor missiles that track and neutralise any rockets or missiles aimed at Israeli targets. It is used for countering rockets, artillery & mortars (C-RAM) as well as aircraft, helicopters and unmanned aerial vehicles.

The genesis of the Iron Dome goes back to the 2006 Israeli-Lebanon war, when the Hezbollah fired thousands of rockets into Israel. The following year, Israel announced that its state-run Rafael Advance Systems would come up with a new air defence system to protect its cities and people. It was developed with Israel Aerospace Industries.

The Iron Dome was deployed in 2011. While Rafael claims a success rate of over 90%, with more than 2,000 interceptions, experts agree the success rate is over 80%. Rafael says on its website that it can “protect deployed and manoeuvring forces, as well as the Forward Operating Base (FOB) and urban areas, against a wide range of indirect and aerial threats”.

How does it work, and what makes it so effective?

The Iron Dome has three main systems that work together to provide a shield over the area where it is deployed, handling multiple threats. It has a detection and tracking radar to spot any incoming threats, a battle management and weapon control system (BMC), and a missile firing unit. The BMC basically liaises between the radar and the interceptor missile.

It is capable of being used in all weather conditions, including during the day and night. 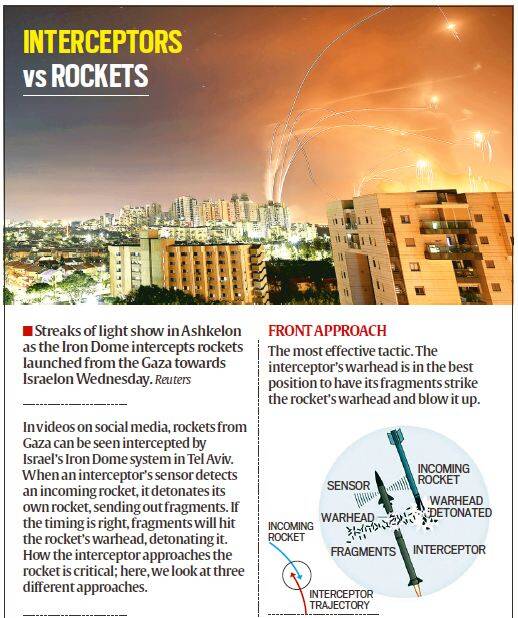 Retired Air Marshal Anil Chopra, who heads the Centre for Air Power Studies (CAPS) think tank in New Delhi, explained that in any air defence system there are two main elements. “One is the radar, which should have the capability to see small objects, and to be able to accurately track it.”

He said there are usually two to three radars in any air defence system to spot and track incoming objects. “When you launch the weapon, it is the tracking radar that will help the weapon reach there.” After that, he said, the “the weapon’s own head will take over”.

Once the missile is fired, it “should be able to manoeuvre, should be able to see the small target on her own and thereafter go and shoot”. But it is impossible to hit the target directly each time, which is why “there is something in each missile called proximity fuse” which is a “laser-controlled fuse”. When passing within ten metres of the target, this activates and blasts the missile with shrapnel that destroys the target. “The warhead is exploded in such a way that it caters for the velocity of the missile and the target.” Chopra said.

How much does it cost?

Each battery, or the full unit, can cost over $50 million, and one interceptor Tamir missile costs around $80,000. In contrast, a rocket can cost less than $1,000. The system dispatches two Tamir missiles to intercept each rocket.

However, Chopra said that is not a good measure to judge cost-effectiveness. “If I have to take… rockets, which cost very little, and I am firing any missile, then it’s an expensive exercise.”

But it proves a deterrent, he said. Also, he said, cost-effectiveness is each life saved. Second, he added, is about the morale of the nation in not being intimidated by rockets.

What kind of systems does India have?

Chopra said Israel, along with the US and Russia, is the leader. “Israel had to master it because of the threat around them and they work very closely with the Americans.”

As India is in the process of buying S-400 air defence systems from Russia for over $5 billion, “Iron Dome was one of the systems that was being spoken of”, he said.

Also Read: US Objects to UN Meeting on Israel, Gaza on Friday: Officials

While India is continent-sized, Israel is smaller and has to deal with threats that are relatively close around it. “We have got S-400, which also caters to the three threats (rockets, missiles and cruise missiles). But they have much longer range. S400 has to cater to shooting down missiles, aircraft in some 300 to 400 km range.” Chopra said the S-400 “has a much larger air defence bubble to knock off threats”.

India and Israel have significant cooperation in missiles, including the Baraak-8. “We have also done a lot of work with Israel on air defence radars,” he said.

At the moment, India has Akash short-range surface-to-air missiles, and Russian systems including Pechora. “All are being gradually replaced with more modern systems,” Chopra said, adding that India is buying two National Advanced Surface to Air Missile System-II from the US to protect Delhi.