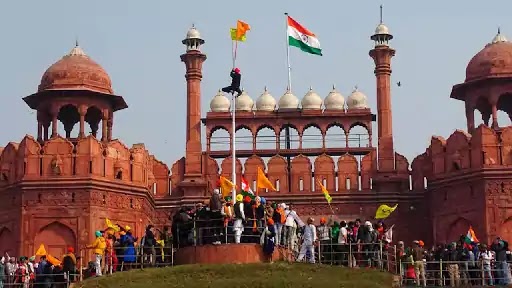 The first chargesheet filed by Delhi Police Crime Branch in connection with the Red Fort violence on January 26 mentions how a massive crowd had gathered at the heritage site after deviating from the predesignated route of the tractor rally and the protesters assaulted over 500 policemen and snatched their weapons.

Police claim this mayhem was a part of a premeditated conspiracy.

In all, 16 people, including actor Deep Sidhu, who were arrested have been named in the 3,324-page final report filed on May 17 at Tis Hazari courts complex. The next date of hearing is May 28. 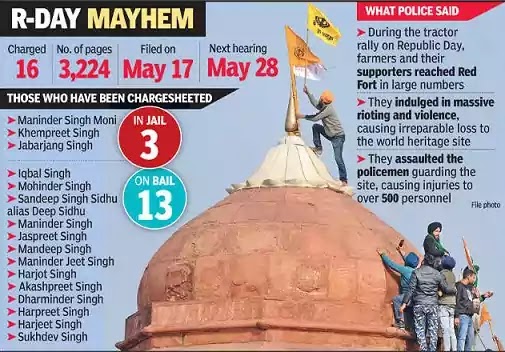 While Delhi Police refused to share details of the chargesheet, sources said the document claimed that a large number of farmers entered Delhi on the pretext of the tractor rally and proceeded towards Red Fort. The protesters allegedly inflicted injuries on over 500 cops, over half of whom remained hospitalised for days. They also hoisted the Sikh religious flag Nishan Sahib atop a minaret.

The violence started as early as 8am at Singhu and Ghazipur borders when protesters started breaking barricades and forcing their way out even before the Republic Day celebrations had begun. There was commotion at Tikri border too, and soon the protesters started their rally violating the agreement with police to go on designated routes after 12pm.

The protesters from Singhu border allegedly got into a skirmish with cops at Mukarba Chowk after deviating from the rally route and began moving towards Kashmere Gate. By 10am, thousands of tractors managed to enter Delhi, thereby violating the mutually agreed terms and conditions for the rally.

ITO also saw spells of clashes. Police used mild force, including tear gas, and snapped internet at many places till the farmers decided to leave in the evening.