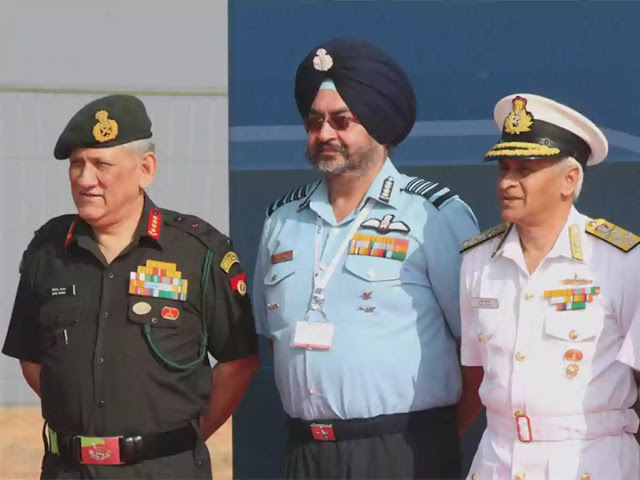 Intelligence, military law, nuclear biological chemical warfare (CBRN), music and catering are among the subjects in which the officers will be trained jointly, said sources.

The JSTIs will operate from existing institutes where the services currently train. Each JSTI will have one of the three services leading the institute. For instance, the Army will be the lead service for the JSTIs for CBRN and intelligence, said sources.

According to a senior government official, the JSTIs for CBRN, music, catering, military law and intelligence have been established. However, the services are finalising their draft government sanction letter.

“Additionally, the School of Foreign Languages will also function as a JSTI. The institute, which sees officers of the armed forces from other countries, plays a key role in defence cooperation that is an important facet of military diplomacy where expertise in foreign languages such as Mandarin or Russian is critical,” the official said on condition of anonymity.

Set up in 1948, the School of Foreign Languages was brought under the administrative control of the Integrated Defence Staff headquarters in 2017.

A joint training command for the three services planned earlier, however, may be delayed, and is likely to be taken up in the next phase amid greater focus on first implementing the major theatre commands, like the Air Defence Command.Idea of JSTIs

In 2016, the Narendra Modi government had constituted the Shekatkar committee of experts to “recommend measures to enhance combat capability and rebalance defence expenditure of the armed forces”.

The panel had called for at least 10 subjects — CBRN, military law, music, catering, intelligence and information warfare, along with UAVs, common air defence weapon systems, helicopters, physical training (PT) and provost — to be offered for joint training at the planned JSTIs.

According to sources in the defence establishment, helicopters, PT and provost were put on hold as these subjects have service-specific needs for training. UAVs and others may be offered in the future.

Training together will save funds

Speaking , Lt Gen. D.B. Shekatkar said the committee of experts — which he had the “honour” to lead — felt that joint training will help in sharing operation philosophy between the services and also save funds.

Also Read:  What is NRC? All You Need To Know

“For instance, intelligence gathering is not confined to only one service. The threats emerging from Pakistan and China are the same for all services. Certain aspects of intelligence must be taught to all services. So, instead of three places, we felt there should be one institute for the purpose,” he said.

Joint training will also allow the services to study together and discuss issues common to everyone.

“Sharing of experience and vision is critical in the military. Training together will also result in saving of funds, manpower and infrastructure thus aiding the rebalancing of defence budget,” he said.