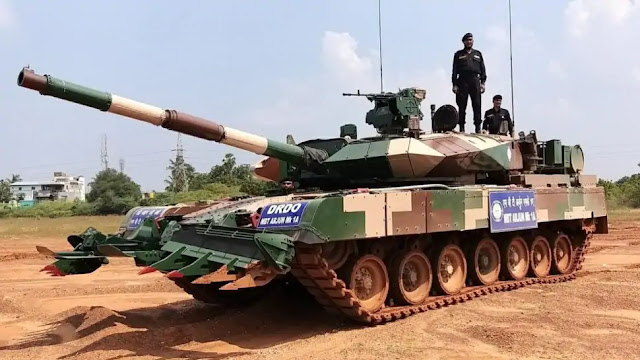 The Arjun MBT Mk IA is an indigenous tank developed for India's self-reliance in Armoured Fighting Vehicle capability. With modern battle tank technologies, it is distinct from the contemporary main battle tanks and is a dependable warfighting machine.
New Delhi: In a big push for Atmanirbhar Bharat, the Defence Acquisition Council (DAC) approved buying of defense equipment worth Rs 13,700 crore for the three armed forces that also includes 118 Arjun Main Battle Tank (MK-1A) for the Indian Army. The Defence Ministry has cleared a Rs 6,000 crore proposal to procure these Arjun Mk-1A Main Battle Tanks.
The DAC under the chairmanship of Defence Minister Rajnath Singh approved capital acquisition proposals of various weapons, platforms, equipment, and systems required by the Indian Army, Indian Navy, and Indian Air Force. Three Acceptance of Necessities (AoNs) for an overall cost of Rs 13,700 crore were accorded.
All these acquisition proposals will be indigenously designed, developed, and manufactured and these will include inter-alia platforms and systems designed and developed by Defence Research and Development Organisation (DRDO).
To meet the Atmanirbhar Bharat goals of the Government on the time-bound defense procurement process and faster decision making and to systematically work towards reducing the time taken for capital acquisition, the DAC also approved that all capital acquisition contracts (delegated and non-delegated) other than D&D cases shall be concluded in two years," the Ministry of Defence said in a statement.
Earlier on February 14, Prime Minister Narendra Modi had handed over the Arjun Main Battle Tank (MK-1A) to the Indian Army in Chennai.

The Arjun MBT Mk-1A is an indigenous tank developed for India's self-reliance in Armoured Fighting Vehicle capability. With modern battle tank technologies, it is distinct from the contemporary main battle tanks and is a dependable warfighting machine.

The Arjun Main Battle Tank Mk-1A, a multi-disciplinary Armoured Fighting Vehicle, is infused with 71 new features and would ensure effortless mobility in all terrains. Besides this, it would also ensure precise target engagement during day and night.