Exoskeletons: The welfare of Troops on the Frontline: Need for R&D Focus

Amidst the ongoing standoff, India and China have amassed thousands of troops in the region after a deadly clash in June 2020 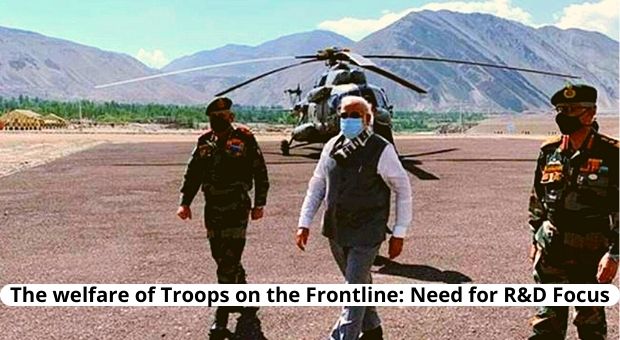 Amidst the ongoing standoff, India and China have amassed thousands of troops in the region after a deadly clash in June 2020 with each nation not likely to move back to either side of Finger 1 to 8, overlooking the Pangong Tso Lake.

With the temperatures touching almost anything between minus 30-40 degree Celsius, the Indian Army soldiers are manning the posts where the conditions are very inhospitable. In today’s hi-tech world, it is the physical bravery of these men who are not only surviving against all odds but willing to sacrifice their lives.

Over the last half a century, more than 50 Defence Research and Development Organisation (DRDO) Labs have been sanctioned by the government for Defence related work. Around a dozen of these labs which are supposed to work on solutions related to a soldier’s health support system, with these named according to the problem faced on the front as a remedy.

The troops stationed at high altitude areas such as Siachen, Ladakh require High altitude equipment, clothing, special ration, and sleeping facilities to face the onslaught of the inclement weather and ailments caused by extremely cold weather conditions. Comptroller Auditor General (CAG) of India has highlighted that delays occurred in the procurement of high altitude clothing and equipment items resulting in an acute shortage of essential items like clothing, snow goggles etc.

The same CAG Report also states that from 2004-05 to 2015-16, DRDO Lab DMRL completed 22 projects for R&D purpose but only two Transfer of Technology (ToT) agreements occurred with the Industrial Partners for full-scale production. But these two ToTs also failed to finally deliver the full Industrial scale production.

As has been reported earlier by Financial Express Online, DRDO Lab carries out multiple R&D in the bio-engineering and electro-medical technology so that technological advancement reaches the soldiers. One example being exoskeletons which can be worn by over a regular uniform or combat gear so that a soldier’s strength is augmented. This shall ensure those soldiers out on patrol duty can wear leg-gear which assists in walking in the snow, thereby reducing exhaustion and fatigue faced by the soldier in a thin oxygen climate. For the Indian soldier, such futuristic technology which could have helped in the minus 30-40 degrees Celsius temperature is still a long way to fructify.

A senior officer who wished to remain anonymous has told Financial Express Online, “This is an R&D project on which DRDO is spending resources and manpower on their own and does not have a sanction from the services, hence not planned for delivery. It may be prudent that such ad-hoc projects can be allocated to the private Industry; along with fund allocation for better results and ensures ‘Atmanirbhar Bharat’ motto in the Defence sector is sustained.”

What is the current status of Exoskeletons

Responding to Financial Express Online on the current status of the Exoskeletons, the DRDO says, “DEBEL as the nodal lab has taken up augmentative exoskeleton development utilizing in house expertise in disciplines of Biomedical/Biomechanics, actuators and control systems, towards enhancing Indian soldiers’ performance in military scenarios. Various configurations of exoskeleton like upper extremity, lower extremity and full-body exoskeletons are being developed involving various DRDO laboratories.”

“Since the exoskeletons are application-specific and wearer/person-specific; DEBEL has carried out the systematic full-body data collection of biomechanical parameters on Indian soldier’s anthropometry during their specific mission activities and also carried out musculoskeletal modelling and simulation to understand the muscle forces acting on soldiers, with and without wearing the exoskeleton. Based on this simulation and muscle force activity, DRDO has developed a laboratory prototype model of the powered exoskeleton and currently it is undergoing functional validation at the laboratory. DRDO is currently working on Optimization, Joint compliance mechanism, Innovative payload transfer mechanism and biomechanical design, Indigenous actuators and Reduction of system weight using composites,” the response to Financial Express Online from DRDO states.

Indian Armymen to become Super Soldiers? May soon use Exoskeleton Technology; here’s everything about next gen Exo-suits

A senior Army officer who wished to remain anonymous has suggested “deputing young generation of scientists at DRDO to forward postings, just as is being considered for Indian citizen’s Tour of Duty. Such a posting will help scientists who are working in various Life sciences labs of DRDO to understand the needs and requirements of the soldier. This will help in their research and development of various products and solutions for the men serving in extreme weather conditions and altitudes.”

Objective milestones for delivery to the military against the sanctioned manpower and budget, along with an active Private sector participation are some of the changes expected when Indian soldiers are engaged in a tussle of strength at the border. Every ounce of support to these soldiers makes a huge difference in safeguarding India’s sovereignty.

Some critical military technologies which are yet to be delivered to the end-user include or lack of timely delivery of critical military technologies like indigenous Kaveri engine for Tejas, AIP (Air Independent Propulsion) for submarines; Rustom drones are few of the examples of today, while Main Battle Tank (MBT) Arjun and others were of the past.

Similar to various Occupational Health and Safety Standards in place, it is high time that DRDO delivers the basic technology for Indian soldiers through the indigenous Industry partners. Such technologies required for personal Health and Safety of the Indian soldiers detailed on the frontline are non-negotiable and need special review by Ministry of Defence (MoD) for effective Project Management.