Helicopters, Aircraft, Drones, and Much More for the Indian Armed Forces

The Ministry of Defence (MoD) in its annual report has also said that the ICG is planning to procure 14 Twin-Engine Heavy Helicopters (TEHH). 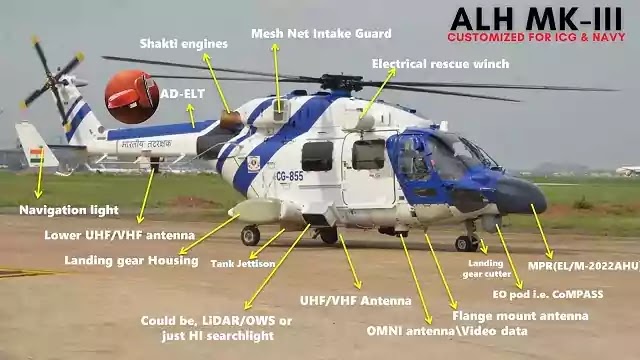 Indian Coast Guard (ICG) will be receiving 2 out of 16 ALH Mk-III helicopters, later this month. By September 2021, all the 16 helicopters are expected to be inducted in the ICG. Despite the global pandemic of Covid-19 and resultant lockdown, production activity on these helicopters has been progressing well at the state-owned Hindustan Aeronautics Limited (HAL) facility in Bengaluru.

The Ministry of Defence (MoD) in its annual report has also said that the ICG is planning to procure 14 Twin-Engine Heavy Helicopters (TEHH), the contract for which is expected to be inked by next March. Once the contract is finalised, these helicopters are going to be delivered by 2025-26 and will be deployed from shore-based stations. For the procurement of these helicopters, AoN was given by the DAC in January 2020 and the RfP has been issued to four global vendors last summer.

These helicopters after taking off the ICG ships will be able to undertake Maritime Surveillance, SAR, medical evacuation and Pollution Response missions’ up to 200 Nm from the coastline.

These helicopters are going to be used for undertaking shore and shipborne operations, in accordance with the charter of ICG. The Areas of Responsibility (AoR) include Maritime Surveillance, SAR, Medical Evacuation, Casualty Evacuation, Logistics support to ships as well as Pollution Response sorties.

The contract for 16 ALH Mk-III helicopters was signed with M/s HAL, Bangalore in March 2017.

The annual report of the MoD talks finalising the procurement of the Airbus’ C-295 transport aircraft through the `Make in India’ process, as well as the deal for the Tejas Mk 1-A. These two deals have been pending for a while. The government also plans to finalise the plans for the indigenous Light Combat Helicopter and upgraded Heron drones from Israel.

Since the focus is on `Atmanirbhar Bharat’ in defence, the deal for 83 TEJAS MK-1A from HAL for the Indian Air Force (IAF) is waiting to get approval by the Cabinet Committee on Security (CCS). Once the approval comes from CCS, the contract will be inked.

According to the annual report, out of the 56 C-295 aircraft, around 40 of these will be `Made in India’ with the participation of an Indian Production Agency. This is at CFA approval stage and the contract is most expected to be signed later. The report which has not mentioned any date or year for the contract to be signed has stated that this is going to be a first-of-its-kind deal which is planning to have the private companies participate in the production.

These C-295 Transport Aircraft which are going to be manufactured in India will be replacing the ageing Avros transport aircraft of the IAF and the deal when inked is going to be for approximately USD 3 billion.

The deal will be between the MoD, Tata Advanced Systems Limited & Airbus, and 16 aircraft will be manufactured at the Airbus facility and the rest here in India through Transfer of Technology by Airbus. Once the production starts at the Tata facility in India, it will open doors for domestic suppliers which will be feeding the production line.

In 2013, the RFP for the replacement of Avros was issued to the global players and the approval by the DAC was given in 2015. Only Airbus & Tata were the sole bidders which had pitched the C-295 aircraft.

Around 50 Indian suppliers from both public and private sector are embedded in Airbus’ their global chain. Companies including HAL, Indian Space Research Organisation (ISRO), HCL, Wipro, Aequs and others are part of this chain.

The contracts for the upgrade of Israeli drones Heron and the procurement of Light Combat Helicopter from HAL are likely to be inked in the first quarter of 2021, and most probably at the forthcoming Aero-India 2021.

In view of the ongoing standoff between India and China along the Line of Actual Control (LAC) in eastern Ladakh, and in an effort to further ramp up its surveillance capabilities combined with firepower, the government has been focusing on upgrades as well as new procurements.