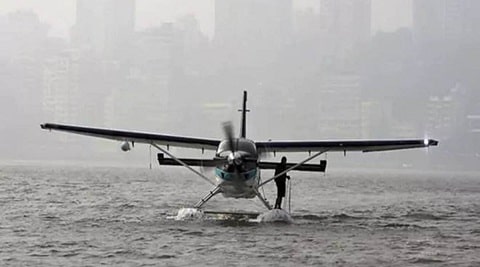 A month after the Twin Otter 300 seaplane flew back to its home country in the Maldives for a ‘scheduled maintenance’, a new aircraft is set to reach India to resume the seaplane service connecting Sabarmati Riverfront in Ahmedabad and the Statue of Unity at Kevadia in Narmada district by December 27, the Gujarat State Aviation Infrastructure Company Limited (GUJSAIL) said Wednesday. The seaplane operations, which have been suspended since November 28, will resume on December 28, it said.
SpiceJet officials said the aircraft being brought in will be newer and “about a decade-old”. The bookings for the Ahmedabad-Kevadia seaplane route have commenced from December 28, they added.
The aircraft — 8Q ISC — which was brought in on October 25 for the inaugural run of India’s first-ever seaplane service, was a 49-year-old aircraft and had maintenance needs that could not be met in India due to its foreign registration and an absence of water hangar in the country. The aircraft had undergone a two-day maintenance activity on the third day after its inauguration.
Officials said the government had conveyed to the SpiceJet, which is operating the seaplane under the subsidiary SpiceShuttle, the company must fetch a “younger” aircraft that is not “fatigued” to ensure longevity.
SpiceJet has a wet-lease with Maldivian Aero, which is responsible for the operations, maintenance, insurance and crew of the aircraft. The aircraft, brought in for the inaugural run, has received much criticism for being “old”.
“The government has expressed its view that a younger aircraft would be more suitable for the operations as the increase in the number of daily trips is on cards, along with a second phase of the water aerodrome operations between Ahmedabad and Palitana. The older aircraft was fit to fly but it is true that it wouldn’t have the same longevity as a new aircraft,” a SpiceJet official said.
On Wednesday, Captain Ajay Chauhan, the director of GUJSAIL, told The Indian Express that SpiceJet was to bring in a “similar aircraft” on December 27. “The operations will resume on December 28 once the aircraft is here. There has been a delay because a cyclonic storm was building up in the Indian Ocean and the weather conditions were not suitable for the aircraft to fly. A similar Twin Otter 300-series aircraft will be coming in as a replacement for the first aircraft that operated for a month,” Chauhan said.
Incidentally, in an application seeking information under the Right to Information Act, 2005, Ahmedabad-based social activist Vishwas Bhambhurkar in November had requested the Directorate General of Civil Aviation (DGCA) to provide authenticated photocopies of “all permissions sought and received regarding the operation” of the seaplane service between Ahmedabad and Kevadia.
In its reply, the DGCA said the SpiceJet Technic Private Limited had made an application on October 28 seeking authorisation to use water aerodrome sites at Sabarmati Riverfront, Ahmedabad and Statue of Unity at Kevadia, starting October 30 — it was inaugurated on October 31 by Prime Minister Narendra Modi.
The communication noted that in view of “satisfactory compliance of minimum safety requirements at both water aerodrome sites” as laid down in Civil Aviation Requirements (CAR) provisions, SpiceJet “is authorised to use” both aerodromes for passenger charter operation with the Twin Otter aircraft with effect from October 30 for a period of one month, as a provisional permit. The authorisation was granted on October 29, a day after SpiceJet’s application.
Under Section 3 Series F Part I of the appropriate civil aviation provisions, the DGCA can recommend to the Ministry of Civil Aviation to grant special permission for operation and retention of a foreign-registered aircraft in India beyond a period of 15 days, up to 60 days, on a case-to-case basis. A case can be made if the state government, in turn, recommends so to the DGCA owing to “official commitments”.
Chauhan said, “The interim provisional permit is a regular process. SpiceJet has already applied for permission for the new aircraft that will come in by the end of this week. The general procedure is to grant permission after the aircraft is inspected and assessed once it lands in India. The new aircraft will also receive the permissions as needed and they can be extended on application.”
The pre-feasibility report submitted by the Civil Aviation Department of that state government for the development of Sabarmati Riverfront Water Aerodrome estimated: “The floating population (passengers) of 380 is envisaged per day. The annual projection is about 1,02,600 passengers per annum during assumed 270 non-monsoon days.”
Source