The mortal remains of soldier Shubham Sharma, 22, were consigned to flames with full military honours at his native village Fatehpur Sheikhan. 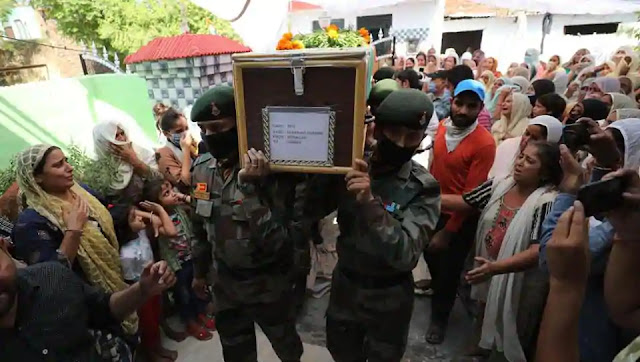 The mortal remains of soldier Shubham Sharma, 22, were consigned to flames with full military honours at his native village Fatehpur Sheikhan, along the 198-km international border in RS Pura sector of Jammu on Friday afternoon.

He was among two soldiers who were killed in Pakistan army’s shelling along the LoC in Nowgam sector (Kashmir) on Thursday.

People raised pro-India and anti-Pakistan slogans while bidding final adieu to Sharma. The deceased is survived by parents, and two siblings.

“Shubham had joined the army in 2016 and on Thursday he died on the line of duty in Nowgam sector. His mortal remains reached the village on Friday,” said village sarpanch Surjit Singh.

Shubham’s father, Vijay Kumar Sharma, who is a police SI, said, “I am proud of my son, who has made the supreme sacrifice for sovereignty of the nation.”

Shubham’s younger brother, Sourav, is training to join the army. “My brother sacrificed his life for the country and I will carry forward his legacy,” he said.

Chinar Corps commander Lt Gen BS Raju and all ranks paid homage to the soldiers at Badamibagh cantonment, he added.

Meanwhile, activists of Dogra Front and Shiv Sena took out a protest rally and burnt Pakistan flag for continuous ceasefire violations along the LoC.

L-G pays tributes to the soldiers.

Lieutenant governor Manoj Sinha paid tributes to the soldiers who were killed during the ceasefire violation in Nowgam.

“The soldiers laid down their lives in the service of the nation. The nation is indebted by this sacrifice,” Sinha said. He also prayed for the speedy recovery of four jawans who were injured in the incident.