CRPF inks MoU with IIT-Delhi, DRDO to prepare tech experts from among force

The CRPF is designated as the lead internal security force of the country and is the mainstay for anti-Naxal operations in Left Wing Extremism-affect. 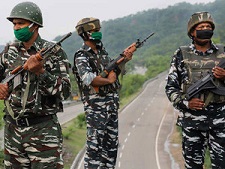 NEW DELHI: The Central Reserve Police Force (CRPF) signed an MoU with IIT-Delhi and the DRDO on Saturday to create a pool of officials who will work to find technology solutions for its operational challenges.

The about 3.25 lakh-strong force has about 500 officers and sub-officers who hold professional degrees in engineering and technology.

The Memorandum of Understanding between the country's largest paramilitary force, the Indian Institute of Technology-Delhi and the Defence Research and Development Organisation (DRDO) will enable these officers to undertake short-term specialised courses at these institutions and also pursue research work.

"A batch of 40 engineering graduate officers and sub-ordinate officers of the CRPF with right aptitude and potential will undergo a certificate course of about three to six months under IIT-Delhi's continuing education programme," a CRPF spokesperson said.

"This will equip them with unique skills, capabilities and knowledge to tackle complex challenges, meet operational and strategic needs and enhance competitive advantage," he said.

A selected group of officers from this trained batch will undergo higher degree courses at the IIT-Delhi. These trained officers will act as tech advisors to the force, the spokesperson said.

The chosen officials will also be associated with joint research projects undertaken by the DRDO and IIT-Delhi in defence and security technology solutions, he said, adding the first batch is expected to undertake courses and research work in ballistics, building and infrastructure, information technology and communication.

CRPF Director General A P Maheshwari said, "The aim of inking the MoUs with the two premier institutions is to build capacity for optimal utilisation of police technologies and to integrate requirements of the force with their research labs for realistic indigenisation of technologies on the internal security grid."

The CRPF is designated as the lead internal security force of the country and is the mainstay for anti-Naxal operations in Left Wing Extremism-affected states and counter-terrorist combat in the Kashmir Valley.