Indian Army ready for winter endurance test at 5,800 metres on Finger 4 of Pangong Tso against PLA

The situation on all friction points is a stalemate with PLA accusing the Indian Army of upping the ante south of Pangong Tso on August 29-30.

At the height of 5,800 metres on Finger 4 mountainous spur a winter endurance test is set to take place this winter with both the Indian Army and Chinese People’s Liberation Army (PLA) facing each other with first short snow already fallen on the Karakoram and Kailash ranges in the Ladakh region.

While the winter is expected to take the turn for worse after Diwali this year, the situation on all friction points is a stalemate with PLA accusing the Indian Army of upping the ante south of Pangong Tso on August 29-30 as a result of which their claimed withdrawal plans were scuttled. 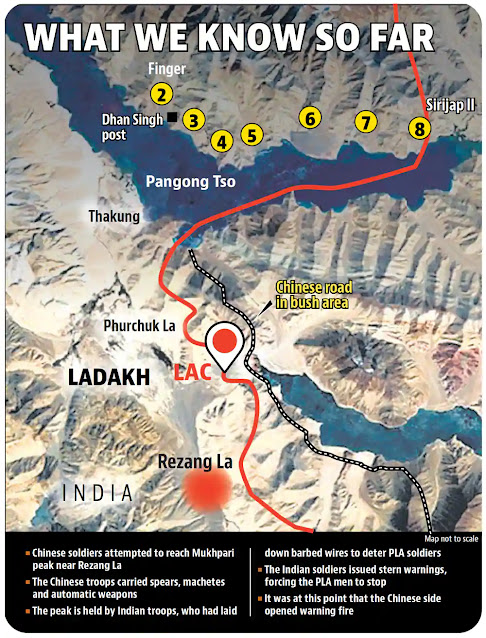 The situation along the 1,597-km Line of Actual Control (LAC) in Ladakh continues to be tense but under control with a small detachment of Indian Army facing off a PLA detachment on Gogra Hot Springs or patrolling point 17 A.

The situation on the north bank of Pangong Tso is that a small number of troops on both sides are at the Finger 4 height with PLA stationed behind finger 6 and Indian Army on finger 3. There is no PLA presence on the ground level of PLA four or five but on the dominating height of finger four.

On the southern banks of Pangong Tso, the Indian Army is dominating the Rezang la-Rechin La ridgeline on Kailash ranges with strong positions to defend the LAC despite PLA’s presence on Black Top and Helmet with the Indian troopers in between the two at the saddle.

“The situation is that both sides are defending their positions but the ridgeline in the area is with the Indian Army,” said a military commander familiar with the postures of the two armies.

Although the Indian Army will have a new Ladakh Corps Commander in Lt Gen PG K Menon in place of Lt Gen Harinder Singh in October, the former is Colonel of the Sikh Regiment who dishes out the choicest Punjabi cuss words despite being from Kerala.

He has a vast experience on the LAC as he was the brigade general staff (Operations) of the XIV Corps in Ladakh before commanding a division in Tawang in Arunachal Pradesh.

While the PLA has deployed a brigade strength of mechanized infantry around Tien-Wien Dien across the Daulet Beg Oldi LAC, the Indian Army troops are patrolling the Depsang bulge area within the patrolling limits despite the Chinese efforts to block them. The PLA air activity in this area is more than in the south of the DBO sector due to the close proximity of the Hotan airbase in Tibet.

As another round of Indian and Chinese military-diplomatic dialogue for total Ladakh disengagement will soon take place, the Indian Army commanders are prepared for the long winter ahead.

From November onwards, it will be the endurance powers of a voluntary army (India) against conscript (PLA) army that will be on display. Sitting on the glaciated heights of Saltoro ridge since 1984, the Indian Army will surely give a run for money to the adversary.