Indian Army's artillery assault on terror launch pads at Dudhnial facing the Keran sector across the Line of Control (LoC) on April 10 killed 08 Terrorists and 15 Pakistan Army Soldiers, according to two persons within the security establishment. 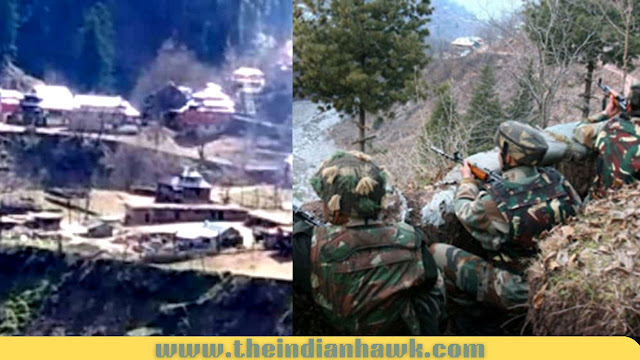 One of them said it was a warning to Pakistan that nothing goes unpunished. Dudhnial was struck on the banks of the Kishanganga river in retaliation for Pakistan's ceasefire violations. The five terrorists killed by the Indian Army Special Forces in the Keran sector on April 5 were launched from this mountain village.

And by those associated with the event, three of the five terrorists killed were from Jammu and Kashmir, whereas the other two had trained with Jaish-e-Mohammed (JeM). Investigations to ascertain their identification continues. The Pakistan Army has acknowledged that the Indian Army shelled along the LoC, the de facto border, in the Sharda, Dudhnial, and Shahkot sectors.

However, it reported that this just four civilians, including a 15-year-old girl, were critically injured. Islamabad has alleged the Indian Army of 708 ceasefire violations in 2020, claiming that two civilians were killed and 42 were injured.

As per a Pakistan Army spokesperson, the Pakistan Army countered the Indian assault by targeting Indian Army locations along the Line of Control with matching weapon calibre or simply deploying artillery pieces and heavy mortars. This, according to Indian intelligence records, was an attempt to conceal the extent of Pakistani casualties.

According to these intelligence reports, 15 Pakistani army soldiers have been killed along with eight terrorists on April 10 when the military deployed long-range weapons to strike targets in the Keran area. Some deadly accidents, especially in shops where food and logistics supplies were stored, have also been recorded in the Dudhnial area.

Apparently to Pakistan analysts, the Indian Army had no choice but to concentrate on the launch pads because almost 160 terrorists from various tanzeems—Lashkar-e-Tayyiba, Jaish e Mohammed, and Hizbul Mujahideen—were waiting in the vicinity to sneak into Kashmir. Things are no different south of the Pir Panjal in the Rajouri and Jammu sectors, where intelligence sources indicate the presence of 70 Jaish terrorists hoping to cross into India.

According to a senior intelligence official, violations of the ceasefire have been recorded from the Balakote and Mendhar sectors, with mortars being fired along the LoC. "The situation along the LoC is quite hot right now," he remarked. Terrorists frequently infiltrate Jammu and Kashmir through thefire from the Pakistani army.

Per the intel agencies, there are estimated 242 terrorists in Jammu & Kashmir. As per Kashmir observers, once this figure surpasses 300, there would be an escalation of violence and targeted attacks on security forces and political leaders who speak out against Pakistan.
#Defence #India #indian-army