UNGA Chief 'Saddened' by India's Reactions to His Kashmir Statements

United Nations General Assembly President Volkan Bozkir is "Saddened" by India's reaction to his statements on Kashmir, according Amy Quantrill. 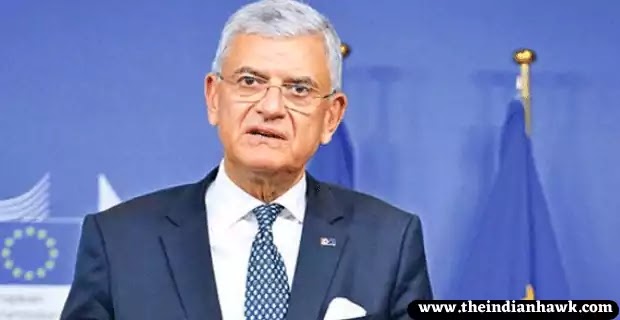 United Nations General Assembly President Volkan Bozkir is "Saddened" by India's reaction to his statements on Kashmir, according to his Deputy Spokesperson Amy Quantrill, who has asserted that they were taken out of context.

She said at a news briefing on Tuesday, "The President was saddened to see a press statement from the Indian Ministry of External Affairs, which portrays his remarks on Jammu and Kashmir from a selective perspective, while they are consistent with the longstanding UN position regarding this issue."

She added, "It is regrettable that the President's remarks were taken out of context."

Referring to Kashmir at a news conference in Islamabad last week, Bozkir said, "I think it is the duty, especially Pakistan's, to bring this to the United Nation platform more strongly."

Speaking with Pakistan's Foreign Minister Shah Mehmood Qureshi at his side, Bozkir also endorsed Islamabad's attempts -- so far unsuccessful -- to link the Kashmir issue to the Palestine problem.

"As the minister mentioned, and also compared to two important things, I think the two problems are of the same age, Palestine and Jammu and Kashmir, and I fully agree that this is the case," he said.

He also said that the Kashmir issue does not have the "same enlarged political wind behind it" like the Palestine cause.

Turkey's President Recep Tayyip Erdogan is one of only two leaders -- other than Pakistan's Prime Minister Imran Khan -- to have raised the Kashmir issue in recent years in the 193-member UN General Assembly where Islamabad's attempts to bring it up have been rebuffed.

Bozkir, who is a former European Affairs Minister of Turkey, is by tradition expected to act independent of his country while the General Assembly president.

Reacting to Bozkir's statements, External Affairs Ministry Spokesperson Arindam Bagchi had said in a strongly worded statement, "When an incumbent President of the UN General Assembly makes misleading and prejudiced remarks, he does great disservice to the office he occupies. The President of the UN General Assembly's behaviour is truly regrettable and surely diminishes his standing on the global platform."

"We express our strong opposition to the unwarranted references made with respect to the Indian union territory of Jammu and Kashmir by the President of the United Nations General Assembly Volkan Bozkir during his recent visit to Pakistan," he said.

Explaining Bozkir's position, Quantrill said, "During his joint press engagement with the Foreign Minister of Pakistan, the President also replied to questions from the press members regarding the procedural aspects of a possible consideration of this (Kashmir) issue in the UN General Assembly, while reiterating the UN position, which is governed by the UN Charter and applicable Security Council resolutions."

One of the Security Council Resolution, No. 47 adopted on April 21, 1948, called for Pakistan's complete withdrawal from Kashmir.

Quantrill added, "President also recalled India and Pakistan's Simla Agreement of 1972, which states that the final status of Jammu and Kashmir is to be settled by peaceful means, in accordance with the UN Charter."

Under the Simla Agreement signed by Indira Gandhi, who was India's prime minister, and Zulfikar Ali Bhutto, who was Pakistan's president at that time, the two countries agreed to deal with their differences bilaterally, thus excluding any third-party involvement.

Quantrill said that Bozkir had "recalled that throughout his term, and consistent with the UN policy, and applicable UN Security Council resolutions, he encouraged all parties to refrain from changing the status of the disputed territory".

That was a reference to India abrogating Article 370 of its Constitution which gave a special status to Kashmir.

"The President continues to support dialogue and diplomacy and encourage both Pakistan and India to resolve this dispute through peaceful means," she added.

Bozkir also visited Bangladesh during last month's South Asia trip but skipped India because of the virulent second wave of the COVID-19 pandemic.

While announcing the trip, his spokesperson Brenden Varma said that he would travel to India later.

Bozkir was awarded the Crescent of Pakistan, the nation's second-highest civilian honour, during his visit.