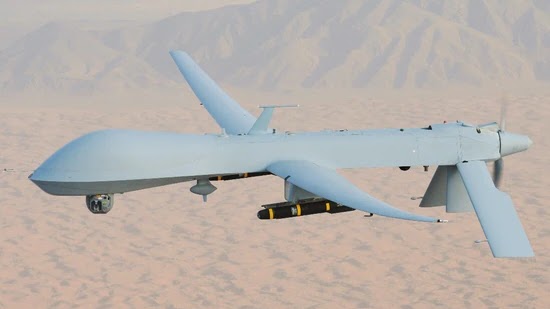 The Indian Navy is set to approach the defence ministry for the acquisition of 30 Predator armed drones from the US for the three services to counter the challenge posed by Chinese Wing Loong II drone with precision strike capabilities. The Chinese weaponized drone has been acquired by Pakistan and has plans to jointly produce the same with parent manufacturer Chengdu Aircraft Corporation.
The Indian Navy, which has been designated as lead by both Army and Air Force in the acquisition of MQ-9 drones, has asked the Defence Ministry for early convening of Defence Procurement Board meeting under the chairmanship of Defence Secretary Dr Ajay Kumar to get the project cleared in principle.
Once the DPG clears the project, the Navy will move the Defence Acquisition Council for acceptance of necessity (AON) of the procurement, which will be done through the US Foreign Military Sales route under government to the government scheme.
The Navy and the other two services are most satisfied with the performance of the two unarmed Predator drones on lease from the US as it has developed maritime domain awareness from Sunda Strait in Indonesia to the eastern seaboard of Africa. The Indian Navy, Army and Air Force will get 10 MQ-9 Predator drones each, fitted with guided bombs and Hell-Fire missiles.
While the Department of Defence Production raised the issue of HAL signing an MOU with Israel at DefExpo 2020 to develop and sell drones at a defence planning committee meeting to discuss the acquisition of Predator, the armed forces have pointed out that the Israeli drones are for hunter role, but the US drone is capable of both hunting and destroying the target with a proven role in Afghanistan and Iraq against terrorists and insurgents.
In the meanwhile, the Indian Army is set to acquire some six Heron high altitude long endurance drones from Israel on lease and parallelly upgrade the existing Heron drones with data-link and better radars. While the proposal for lease is pending with the Defence Ministry, the upgradation work has already begun to meet the challenge posed by the People’s Liberation Army (PLA) on-going deployment in East Ladakh as well as in the Xinjiang region across Karakoram Pass.
Source