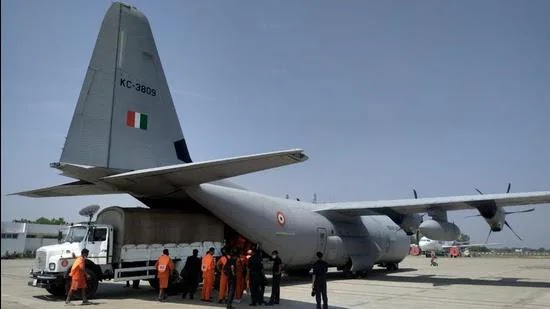 Preparations to tackle devastation likely to be caused by Cyclone Yaas on May 26 began in full swing in Bengal on Sunday with the state government setting up a special control room from where chief minister Mamata Banerjee will monitor the situation.

The state government relaxed a few lockdown regulations so that essential goods and agricultural products can be moved and emergency activities initiated in south Bengal.

During the day, the Indian Air Force deployed a C-130 aircraft to carry 21 tons of essential equipment and 334 National Disaster Response Force (NDRF) personnel from Patna, Vananasi and Arakkonam (in Tamil Nadu) to Kolkata and Port Blair.

“The cyclone is expected to make landfall on the West Bengal and adjoining Odisha coast on May 26. The IAF has kept a C-17, an IL-76, three C-130s, four An-32s and two Dornier transport aircraft on readiness. Additionally, 11 Mi-17V5s, two Chetaks, three Cheetahs, two ALH Dhruvs and seven Mi-17 helicopters are also on alert for any eventuality,” the IAF said in a statement.The Alipore weather office in Kolkata said at 3 pm on Sunday that the low pressure noticed over east-central Bay of Bengal on Saturday had concentrated into a depression about 560 km to the north-northwest of Port Blair (Andaman), 590 km east-southeast of Paradip (Odisha), 690 km south-southeast of Balasore (Odisha) and 670 km south-southeast of Digha (West Bengal).

It is very likely to move in a north-northwest direction and intensify into a cyclonic storm by May 24 morning and into a very severe cyclonic storm in the subsequent 24 hours. It will continue to intensify further and reach north-west Bay of Bengal by May 26. It is very likely to cross north Odisha and West Bengal between Paradip and Sagar islands by evening of May 26, said the weather office.

In Kolkata, the city civic body beefed up operation at all 80 pumping stations so that rainwater can be drained out fast. “We have already started pumping out excess water so that the underground drainage system remains clear when the cyclone hits the city,” said Tarak Singh, a member of the board of administrators at the Kolkata Municipal Corporation.

Kolkata Police commissioner Soumen Mitra held a meeting with officials of the army, NDRF, civic body and CESC, the private power supplier to the city.