FBI Investigating Dozens of Rioters For Death of Police Officer During Attack At US Capitol,Brian Sicknick died a day after a mob supporting US Donald 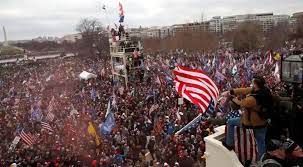 The New York Times reported that FBI is in the process of questioning dozens of people.

According to NYT, the FBI shed light on its investigation in a memo which was dispatched to the private sector and others on Friday.

Last week, Reuters reported that Sicknick was pepper-sprayed and hit hit on the head, as stated by his father.

Soon after the injuries, he was rushed to a nearby Washington hospital. He was resuscitated by ambulance crews twice in transit. But he died the next day.

The Washington Metropolitan Police is investigation Sicknick’s death as a homicide. The FBI is assisting the local police.

Five people including Sicknick died in the attack on US Capitol last Wednesday which shook the world, marking the first such incident in US history when transfer of power has been marred with the US.

Trump has asked his supporters to show up at a rally near the White House, and then urged them to march to the Capitol where lawmakers were meeting to certify Biden as the winner in the US elections.

Some rioters also lost their lives in the attack.

The memo by FBI added that 14 police officers had been injured in the riots that took the US Capitol by storm.