Army Plans Disciplinary Action Against a Soldier at Farmers’ Protest, Troops Being Sensitized 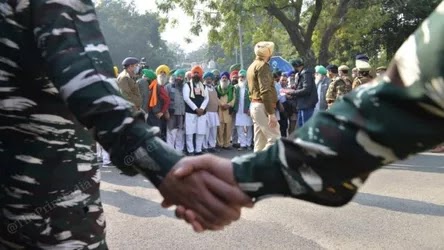 New Delhi: The Indian Army will initiate disciplinary proceedings against a serving soldier who had participated in a farmers’ protest in Bathinda last month, a development that has led to local commanders sensitizing the troops on the dos and don’ts.

The Army is also in the process of identifying another soldier who had posted a video on social media in support of the farmers' protests.

Sources in the defense and security establishment said soldiers are already aware of what they should and should not do. However, the local commanders are sensitizing their men, they added.

The sources also said that in the case of the protests at Bhatinda, the soldier, who carried a placard in support of the farmers while wearing uniform and face shield, was identified after a probe was initiated when his pictures came out on social media.

Section 21 In The Indian Army Act

The act by the soldier, who was on leave at that time, was in violation of the Army Act, 1950, which lays down clear rules against participation in protests, the sources added.

It also forbids soldiers from attending or addressing any meeting or to taking part in any demonstration organised by any body of persons for any political or other purposes.

Sources said that discipline is a big priority in the armed forces. “It was the farmers protest today, tomorrow, it might be something else. The armed forces are the last bastion for the nation and hence discipline is very important,” a source said.