This is the first time a Pakistan minister has admitted what India has long maintained -- that the country directly and indirectly encourages. 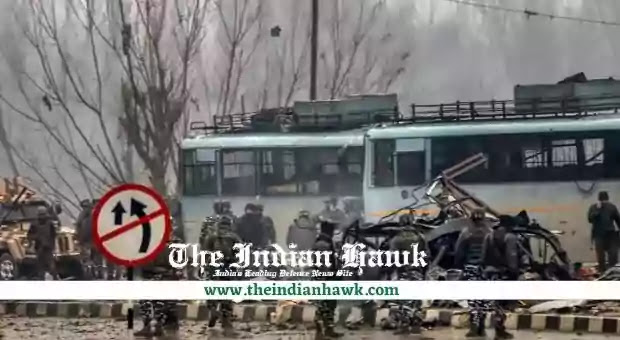 Security personnel carrying out the rescue and relief works at the site of suicide bomb attack at Lathepora Awantipora in Pulwama district of south Kashmir on February 14, 2019 (File Photo)

Pakistani minister Fawad Chaudhry sparked a controversy on Thursday when he admitted the country’s role in the Pulwama terror attack, bragging on the floor of parliament that it (Pakistan) had entered India and beaten it on its own soil.

Chaudhry, who holds the science and technology portfolio in Prime Minister Imran Khan’s Cabinet and was formerly the country’s information minister, made the remarks in the National Assembly while responding to comments by Pakistan Muslim League-Nawaz (PML-N) lawmaker Ayaz Sadiq, who contended foreign minister Shah Mahmood Qureshi was shaken at the possibility of an Indian attack to free Indian pilot Abhinandan Varthaman, who was shot down in a dogfight amid the standoff in February last year.

“The confidence with which he [Sadiq] said such things, that Shah Mahmood Qureshi’s legs were shaking because India was about to attack. Hum ne Hindustan ko ghus ke mara hai (We went inside India and hit them),” Chaudhry said, speaking in Urdu.

“And our success in Pulwama, that was the success of this nation under Imran Khan’s leadership,” he added.

This is the first time a Pakistan minister has admitted what India has long maintained -- that the country directly and indirectly encourages and supports terror groups that target India. Pakistan has disregarded evidence provided by India on the role of terror groups based there in the 26/11 Mumbai attacks and the Pathankot airbase attack, but it might be difficult for it to walk back on an admission by its own minister -- and on the floor of its own Parliament.

Forty Central Reserve Police Force (CRPF) troopers were killed when a suicide bomber rammed an explosives-laden car into a bus, part of a convoy of security forces, in Pulwama on February 14, 2019. In reprisal for the attack, for which responsibility was claimed by the Pakistan-based Jaish-e-Mohammed (JeM) terrorist group, Indian Air Force planes bombed a JeM training in Balakot, Pakistan, 12 days later.

On February 27, 2019, Pakistani said its combat jets had targeted areas near Indian military installations across the Line of Control (LoC), and this sparked an aerial engagement which resulted in the shooting down of the jet piloted by Varthaman. On March 1, 2019, Pakistan freed Varthaman.

Chaudhry contended that after the Pulwama incident, the way in which Pakistan’s military and air force “went in and hit Hindustan” had left India’s media and political leadership “ashamed”.

There was no immediate response to Chaudhry’s remarks from Indian officials.

Union minister of state for road transport and highways, and former Indian Army chief, General VK Singh, said the Indian government had already said all leads pointed to Pakistan. “It is good that Pakistan has admitted it. I am sure our government will utilise this admittance to tell the world that Pakistan needs to be blacklisted in the FATF (Financial Action Task Force),” he told ANI.

Soon after Chaudhry’s remarks were widely covered by the Indian media, he told HT over the phone from Islamabad that he had been referring to the standoff and air strikes by both sides in his remarks in Parliament.

“I was referring to the post-Pulwama issues, when the Pakistan Air Force taught a lesson to the Indian side after the air strike on February 26. If some one wants to twist my remarks, there is little I can do,” Chaudhry said.

During the external affairs ministry’s weekly news briefing on Thursday, spokesperson Anurag Srivastava again criticised Pakistan for failing to curb terrorism directed against India. He was responding to Islamabad’s rejection of a call by India and the US for Pakistan to take “irreversible” action against terrorists operating from its soil.

“The whole world knows the truth about Pakistan’s role in supporting terrorism, no amount of denial can hide this truth. Even their own leaders have, time and again, spoken about their role with regard to terrorism. The country which provides shelter to the maximum number of UN-proscribed terrorists should not even attempt to play victim,” he said.

Srivastava also dismissed Pakistan’s criticism of the latest change in land use laws in Kashmir. Noting that the Indian government has taken several measures for the socio-economic development of Jammu and Kashmir, he said the region was an integral part of India. “Therefore, these decisions relate to internal affairs of India and no country has the locus standi to comment on this,” he added.