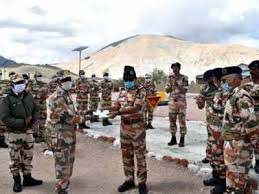 NEW DELHI: As Indian Army troops moved to dominating heights near the south of Pangong Tso, at least 30 personnel of Indo-Tibetan Border Police (ITBP) have occupied new positions near the key Black Top area that oversees China in the Line of Actual Control (LAC) in eastern Ladakh.


According to details shared exclusively with TOI, ITBP jawans moved through Phurchuk La Pass — located at a height of 4,994 metres — to reach their new positions which were earlier unoccupied. Until now, ITBP was largely present only north of Pangong at Dhan Singh Post near Finger 2 and Finger 3 area.

“ITBP DGP SS Deswal had spent six days sensitising troops along the LAC last week. It's the first time we are present in the dominating heights in a good number,” said ITBP IG (Operations) M S Rawat, who had accompanied Deswal along with IG (Personnel) Daljit Choudhary and IG(Leh) Deepam on his first visit to the LAC since the border standoff.


In his address to ITBP jawans last week, Deswal had said that extra vehicles would be provided for troop movement between border outposts and thrust would be on road construction by the government to limit travel on ponies. The Indian Army, the ITBP and Special Frontier Force (SFF) jointly hold dominating heights in the hills near Helmet Top, Black Top, Yellow Bump that oversee China’s People’s Liberation Army (PLA) Post 42830 on its south and Digging Area and Chuti Chamla on its west.
LAC situation unprecedented, can’t be business as usual, says foreign secretary Harsh Shringla
“These positions on heights running corresponding to China’s People Liberation Army’s posts have been unoccupied for long. Our soldiers have fortified the Indian border,” said a source.
ITBP now has more than 39 permanent defence positions along the LAC where its men are present. “ITBP is present in good numbers near Chushul and Tara border outposts. Extra companies are airlifted from Chandigarh,” said a senior ITBP official.

On August 14, ITBP had disclosed that it had recommended 21 names from its troops for the gallantry medal since they faced the Chinese Army during the standoff in Galwan in May and June.