The Chinese PLA has deployed 5,000 to 6,000 soldiers in the area, and the armed forces are fully prepared to deal with any contingency, they added. 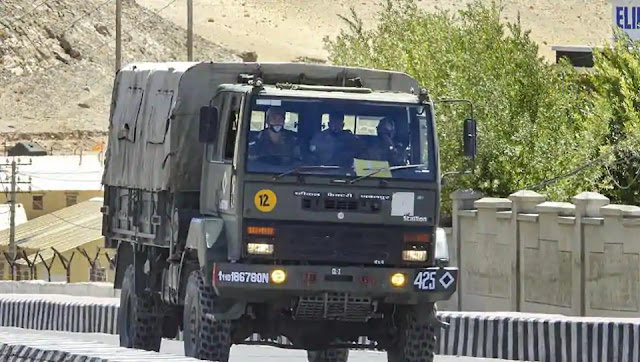 The Indian Army has rushed its front-line tanks and infantry combat vehicles (ICVs) to strategic heights held by its soldiers on the southern bank of Pangong Tso in eastern Ladakh, in response to intimidating military moves by the Chinese People’s Liberation Army (PLA) in the theatre, where conflict is below the threshold of a shooting war but could take any trajectory, top government officials told HT on Wednesday.

The PLA is parading its tank squadrons, mechanised infantry squads, and thousands of soldiers in the area in a show of strength to threaten the Indian Army after it swiftly occupied key heights to prevent the PLA from grabbing Indian territory on August 29, the officials said, requesting anonymity.

The Chinese PLA has deployed 5,000 to 6,000 soldiers in the area, and the armed forces are fully prepared to deal with any contingency, they added.

“The PLA lines up 20-30 tanks, ICVs and thousands of soldiers almost on a daily basis in the Spanggur area. It’s nothing but posturing and we would be concerned if the military elements were not visible and hidden in the undulating folds of the land,” a top official said.

The Indian Army has also taken control of key heights overlooking the PLA’s deployments on the Finger 4 ridgeline on the northern bank of Pangong Tso, the officials said. “Indian soldiers are barely a few hundred metres from Chinese troops on Finger 4,” they said.

“If the military capabilities were to be measured, the combat ratio is 1:1. If China brings in more reinforcements, so will we. The Galwan Valley skirmish showed them that they have to pay a price for their actions. If China wants to start a war, there will be a price to pay on both sides,” the officials said.

“A shooting war doesn’t erupt overnight. A lot of actions happen before that — war of words, firing, skirmishes, smaller conflicts and other pinpricks. We haven’t reached that stage yet. While we don’t think China wants to start a war, nowhere are we underprepared,” the officials said.

The movements come at a time when Indian foreign minister S Jaishankar is due to meet his Chinese counterpart Wang Yi on the sidelines of the Shanghai Cooperation Organisation (SCO) meeting in Moscow on Thursday to seek a diplomatic resolution for the impasse.

The Indian Army on Tuesday said Chinese troops fired into the air on September 7 to intimidate its soldiers holding dominating heights near a strategic mountain pass in eastern Ladakh during a failed attempt to close in on a forward position controlled by India, with bullets flying at the contested Line of Actual Control (LAC) for the first time in 45 years. The last recorded incident when bullets were fired at the LAC was in October 1975, when the PLA ambushed an Indian patrol in Arunachal Pradesh’s Tulung La sector and shot four soldiers dead.

Twenty Indian soldiers and an undisclosed number of PLA troops were killed on June 15 in a seven-hour conflict in Galwan Valley, but no shots were fired in that deadly skirmish.

Experts said the situation along the LAC was volatile and things could go bad.

“The key to how things will go forward from here is whether there is a breakthrough in the talks. While both sides don’t want a shooting war, local dynamics on the ground sometimes have a life of their own. That is the real danger when thousands of soldiers are facing off,” said former Northern Army commander Lieutenant General DS Hooda (retd).

The Indian Army controls ridgeline positions on the southern bank of Pangong Tso that allow it to completely dominate the sector and keep an eye on Chinese military activity, with the most significant heights being held by India on Rezang La and Reqin pass where the PLA is making desperate attempts to regain lost ground.

The army has marked the perimeter of the positions held by it with barbed wire and it would not hesitate to retaliate if the PLA attempts to cross that red line, the officials said. “During talks, the PLA stresses there should be no night movement and mountain manoeuvres but does exactly the opposite on the ground. What is happening in the Ladakh theatre is being controlled by their top leadership and cannot be attributed to the exuberance of local commanders,” the officials cited in the first instance said.

In the northern bank of Pangang Tso, before the PLA grabbed positions on Finger 4, the army would patrol right up to Finger 8 that New Delhi considers within Indian territory. The new positions held by the PLA have curtailed the scope of Indian patrols. Fingers 4 and 8 are eight km apart. The Indian claim line in this sector extends to Finger 8, while the Chinese claim is up to Finger 4.

Top Indian and Chinese commanders are likely to hold a meeting soon to reduce military tensions in eastern Ladakh. Both sides are currently working on finalizing the date for the meeting between corps commander-ranked officers who have met several times but failed to break the deadlock.

“We want talks at the military and diplomatic talks to succeed. The sense we got from the recent meeting between the Indian and Chinese defence ministers in Moscow was that the Chinese don’t want a war...But why are Chinese opening so many fronts, we don’t understand,” the officials said.

The latest tensions in eastern Ladakh come days after defence minister Rajnath Singh asked China -- in a face-to-face meeting with his Chinese counterpart Wei Fenghe in Moscow -- to strictly respect the LAC, not make attempts to unilaterally change the status quo, and work with India for complete disengagement from all friction areas in the sensitive sector.
Source: HT
#Defence #Ladakh Face-Off