Indian Navy will this year get at least three of the 24 MH-60 “Romeo” multi-mission heavy-duty helicopters, equipped with multi-mode radars & more. 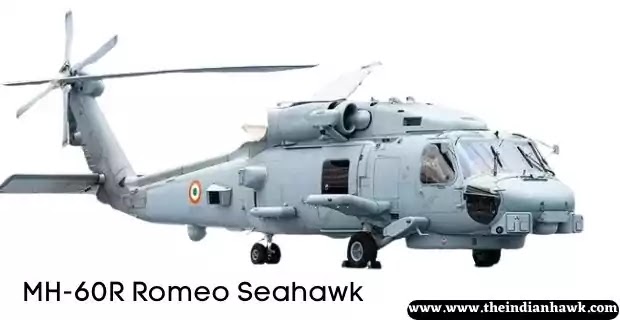 These helicopters are meant to meet the immediate requirement of the Navy which is relying on its P-81 aircraft for anti-submarine operations amid China’s increasing forays into the waters around India.

The Navy will this year get at least three of the 24 MH-60 “Romeo” multi-mission heavy-duty helicopters, equipped with multi-mode radars and night-vision devices as well as armed with Hellfire missiles, MK-54 torpedoes and precision-kill rockets, under the Rs 15,157 crore ($2.13 billion) contract inked with the US in February 2020. This will be a significant capability jump for the Navy in detecting and destroying enemy submarines prowling in the Indian Ocean Region (IOR).

The 140-warship Navy is currently grappling with just a handful of old anti-submarine warfare (ASW) helicopters like Kamov-28s and Sea Kings when the presence of Chinese nuclear and diesel-electric submarines is only going to further increase in the IOR. “All the 24 MH-60R helicopters, which will operate from frontline warships including aircraft carrier INS Vikramaditya, will be inducted by end-2023 or so. It will somewhat plug the critical operational gap on this front,” a defence ministry source told TOI earlier.

ASW choppers typically fly ahead of warships to “dunk” their sonars into deep waters, “ping” for enemy submarines, and then fire missiles, torpedoes and depth charges to clear the path for the fleet during hostilities. They can also undertake anti-ship strikes, over the horizon network-centric operations and electronic warfare missions. The Navy, in fact, has also projected a long-term requirement for another 123 naval multi-role helicopters (NMRHs), after the 24 MH-60Rs, but the proposed “Make in India” project for them is still nowhere on the horizon.

The MH-60Rs are a replacement for the older Sea King 42/42A helicopters that were retired in the 1990s. The case for the 24 choppers, incidentally, began way back in 2005. Manufactured by Sikorsky-Lockheed Martin, the MH-60Rs will be the third type of iconic US helicopters to be inducted by Indian armed forces. The IAF has already inducted 22 Apache attack (for Rs 13,952 crore) and 15 heavy-lift Chinook (Rs 8,048 crore) choppers, both produced by Boeing.

Overall, the US has bagged Indian arms deals worth over $21 billion just since 2007. Several more are in the pipeline. These include the $1.8 billion acquisition of six more P-8I long-range maritime patrol aircraft, which will add to the 12 such planes already contracted for $3.2 billion earlier.