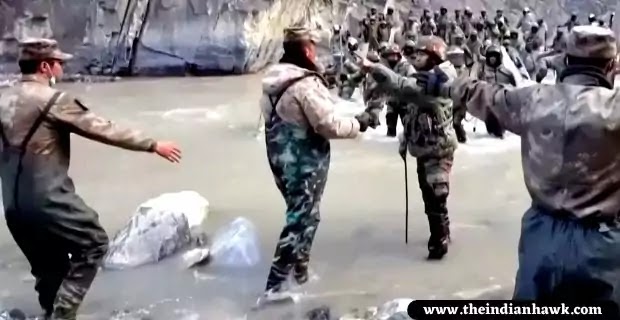 A blogger who made comments about Chinese soldiers who died in a Himalayan border clash with Indian troops last year has been sentenced to eight months in jail.

Qiu Ziming, 38, was found guilty of "slandering heroes and martyrs".

According to state newspaper the Global Times, he is the first to be criminally charged under the offence following an amendment to China's criminal law.

Those charged under this law can be imprisoned for up to three years.

Mr Qiu was also ordered to publicly apologise. He appeared on state broadcaster CCTV where he said he was "extremely ashamed" of himself.

"My behaviour was an annihilation of conscience," he said, according to the Global Times.

Tense relations between India and China culminated in a face off along the disputed border in the Himalayan region last June.

At the time, Delhi said 20 Indian soldiers died in the fighting. Beijing acknowledged casualties but did not disclose further details.

Later, it said four of its soldiers had died.

It was the first deadly clash in the disputed border area in 45 years.

Mr Qiu, who has a large following of 2.5 million people on microblogging site Weibo, had written the offending post on 10 February.

He was detained and later confessed to "illegal behaviour to gain the attention of netizens, distorting facts on Weibo and slandering and demeaning the heroes defending the border".

India and China have been locked in a border dispute for decades. The root cause of the tension is an ill-defined, 3,440km (2,100-mile)-long disputed border called the Line of Actual Control.

Rivers, lakes and snowcaps along the frontier mean the line can shift, bringing soldiers face to face at many points, sparking confrontations. The two countries however have a long-standing agreement to not use guns or explosives along the border.

In January this year, the two armies also clashed along the border in the north-east in India's Sikkim state, leaving troops on both sides injured.

But India and China have since agreed to "disengage" from the border are now in the midst of pulling back troops from parts of it.