US Military Predicts Time, Place of Chinese Rocket Debris Crash: Report | All You Need to Know 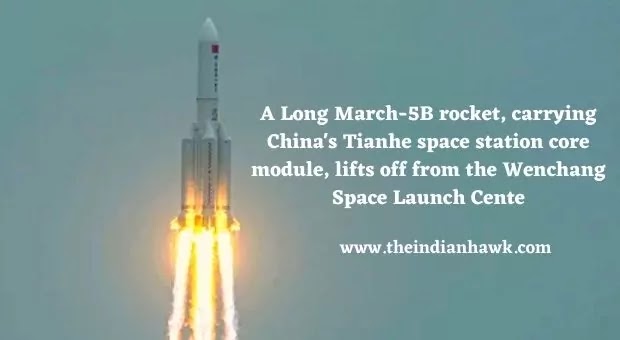 A large segment of Chinese rocket is in an uncontrolled free-fall towards Earth and the latest track prediction suggests that the debris could crash in a potentially populated area. China launched a Long March-5B rocket on April 29 carrying the first module of its new space station into Earth's orbit. While multi-stage rockets typically fall back before getting into Earth’s orbit, this one went into orbit and has to come back into the atmosphere.

The rocket’s 18-tonne main segment is now in a free-fall but Beijing has downplayed fears of damage. Chinese foreign ministry spokesperson Wang Wenbin on Friday told reporters that the upper stage of this rocket has been deactivated, insisting that most of its parts will burn up upon re-entry and the probability of causing harm on the ground is extremely low.

The argument that the debris will just splash down into the ocean, given that the planet is 70 per cent water, was also put forward. Florent Delefie, an astronomer at the Paris-PSL Observatory, told news agency AFP that there will be big pieces left over due to the size of the rocket. "The chances of debris landing on an inhabited zone are tiny, probably one in a million," he said.

However, the latest prediction by the US military, which is tracking the rocket segment, is not encouraging, according to CNN. The US military has predicted that the debris will fall in Turkmenistan in Central Asia around 7 pm Eastern Time on Saturday (4.30am IST on Sunday), per CNN.

Jonathan McDowell, an astrophysicist at the Harvard-Smithsonian Center for Astrophysics, told AFP that there is a real chance of damage to whatever it hits, suggesting an outside chance of a casualty.

This is not the first time that a Chinese rocket has caused concerns for inhabitants on Earth. In 2020, debris from another Long March rocket fell on villages in the Ivory Coast, a West African country, causing structural damage. But the crash didn’t result in any injuries or deaths.

"Having a ton of metal shards flying into the Earth at hundreds of kilometres per hour is not good practice, and China should redesign the Long-March 5B missions to avoid this," McDowell added.