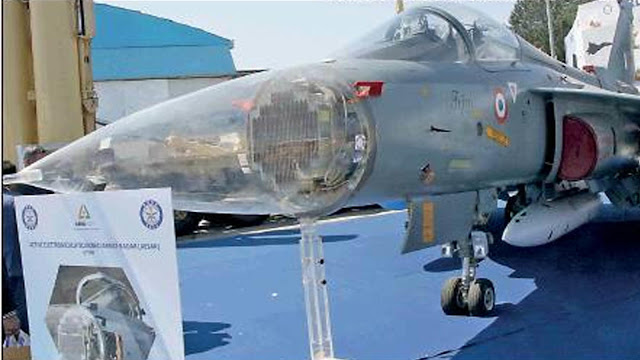 BANGALORE: In a major boost to indigenous defence technologies, at least 51% of the 123 TEJAS fighters that will be inducted into the Indian Air Force (IAF) will have the desi UTTAM radar, replacing Israeli radars that the first batch of aircraft will be equipped with.

In all, IAF will get 123 TEJAS fighters: 40 in initial and final operational clearance (IOC and FOC) configurations and 83 TEKAS MK-1A, orders for which were placed in the first week of February. While the first 40 will have mechanical radars (all Israeli), 83 MK-1A planes will have Active electronically scanned array (AESA) radars.
“We will have the Uttam radar from the 21st TEJAS MK-1A to be produced. Uttam has performed better than anticipated in the trials so far. We’ve already signed an MoU with HAL,” DRDO chairman Sateesh Reddy said.
This means 63 of the 83 will be indigenous Uttam radars developed by LRDE (Electronics and Radar Development Establishment), a DRDO lab in Bangalore. The TOI had reported in 2019 that Uttam radars were likely to replace the AESA radars — the EL/M 2052 — from Israeli firm ELTA.
This is in line with the Centre’s push for increasing indigenous content in defence equipment and will enable HAL to increase the same on TEJAS from the present 52%.
R Madhavan, CMD, HAL, which is producing TEAJS, said: “...That is what we are panning for. Given the delivery timelines we’ve committed to, we will place orders for 20 Israeli radars and Uttam should be ready thereafter. We are targeting to increase indigenous content in TEJAS to 62% to 65%, and this will help achieving that.”
UTTAM is a state-of-the-art AESA radar that can track multiple targets and take hi-resolution pictures to aid in reconnaissance. Seshagiri P, project director, Uttam, said it’s being tested on two TEJASs — LSP2 and LSP3 — and one executive jet. Together they’ve completed around 230 hours of flying, including 30 on TEJASs.
“On the TEJASs, testing is for air-to-air mode at present. The range of the radar should be almost commensurate to launch a BVR (beyond visual range) weapon; it’s specified to be so. But we’re getting a range that’s better than that. We are a couple of sorties away from starting a joint evaluation. After this, it will be ready for user evaluation,” Seshagiri told TOI.
On the executive jet, Uttam’s tested three basic modes — air-to-air, air-to-sea and air-to-ground. “...The same needs to be ported on TEJAS and checked for performance. There’s a fourth mode called navigation terrain avoidance, weather mode (rain bearing clouds),” Seshagiri added.
According to LRDE, UTTAM is a current generation system with features that allow aircraft to boast of low probability of intercept and non co-operative target recognition. “It provides better situational awareness of the battlefield scenario and is capable of tracking multiple targets with high accuracy suitable for firing missiles and interleaved air-to-air, air-to-ground and air-to-sea modes for all terrain solutions,” LRDE said.
Source>>