Launched from a small church of village, while the rocket was transported on bicycle. Read The Amazing Story of India’s First Rocket Launch.

It was 53 years ago, on November 21, 1963, that a small rocket took off from Thumba on the outskirts of Thiruvananthapuram, announcing the birth of the modern space age in India. The sleepy palm-fringed village soon came to be known as Thumba Equatorial Rocket Launch Station (TERLS) and later became Vikram Sarabhai Space Centre (VSSC).

Till 1963, the obscure village of Thumba would not have merited a second look. A quintessential Kerala fishing hamlet with thatched huts, coconut groves and peaceful sea, it was an unlikely setting for a rocket launch station. However, it did have something that caught the interest of Dr Vikram Sarabhai, the father of India’s space program. A small church dedicated to St Mary Magdalene was located on the Earth’s magnetic equator.

The magnetic equator is an imaginary line around the planet that connects all the points where a magnetic needle, when freely suspended, is horizontal. It is scientifically important because the magnetic equator is all where the Equatorial Electrojet exists – a stream of electrons whizzing across the sky, about 110-120 km above the Earth’s surface.

Sounding rockets or the first rockets sent out by any space programme, test and study these electrons for research in the fields of physics, astronomy, and meteorology.

These rockets are the baby steps taken before the establishment of a full-fledged space programme and Dr Sarabhai felt that Thumba was the best place to launch them. In fact, Thumba’s location at 8°32’34” N and 76°51’32” E is ideal for low-altitude, upper atmosphere and ionosphere studies.

So, one fine day, Dr Sarabhai and his fellow scientists (including Dr APJ Abdul Kalam) went to Thumba to talk to the then-bishop of Trivandrum who lived in the house adjacent to the church. They were interested in acquiring the church and the nearby land for their first rocket launch.

Instead of giving them a definite answer, Reverend Peter Bernard Pereira asked them to attend the Sunday mass that week, where he would put the question to the parishioners.

At the mass, the bishop explained the scientific mission and asked the permission of his congregation to hand over the church to the scientists. In his book Ignited Minds: Unleashing The Power Within India, Dr A.P.J. Abdul Kalam has described this particular incident beautifully.

Thanks to the Reverend’s efforts, permission was granted, the paperwork was done and the villagers relocated to a new village with a brand new church in 100 days flat. The bishop’s home was quickly converted into an office, the church became the workshop, and cattle sheds served as storage houses and laboratories. Undeterred by the little funding and few facilities, a handful of enthusiastic young Indian scientists began assembling their first rocket. 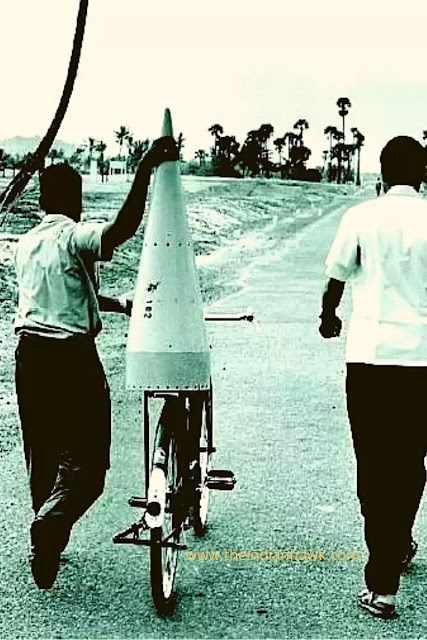 In the initial stages, Thumba had no canteen or facilities of any sort, so the scientists would cycle every day to the railway station at Trivandrum for their breakfast and dinner (they would get their lunch packed). In those days, the only jeep was always busy, so the scientists had to either walk or use a cycle to move within the range.

While weekdays would be very busy, the scientist would have nothing much to do during holidays or weekends. So, they would either go to the beaches at Kovalam or Shankumukham or catch an old Hollywood movie at Srikumar theatre.

Back then, even rocket parts and payloads were transported by bullock carts and bicycles to the launch pad. It was in these unassuming settings that India staged its first launch—that of a Nike-Apache rocket supplied by NASA. This is how it happened.

After six months of labour, on 21 November 1963, India was ready for its very first rocket launch. Many eminent names in science and technology had gathered for the occasion, including Dr Homi Bhabha (the father of the Indian nuclear programme) and Dr P R Pirashoty (the founder-director of the Indian Institute of Tropical Meteorology). The Governor of Kerala was also there along with the district collector and the bishop.

When the rocket was rolled out on to the launch pad, the sultry air was thick with tension. And almost immediately the things started going awry. As the rocket was being hoisted onto the launcher, the hydraulic crane developed a leak. Somehow, it was manually shifted into position. Next, a remote system of the launcher malfunctioned.

Once this was fixed, things finally seemed in order. As the alarm sounded to clear the area around the launch pad, the team of scientist held their breath.

At 6.25 pm, the world was watching as the rocket streaked away into the gathering dusk. Minutes later, a sodium vapour cloud had emerged in the sky-high above, tinted orange by the setting sun. India had successfully put its first signature on space.

An elated Dr Sarabhai sent a telegram home saying: “Gee whiz wonderful rocket show.” Dr Kalam later remembered how the very next day, Dr Sarabhai had congratulated the happy team and spoken to them about his dream of an Indian satellite launch vehicle.

And over the years, the Indian Space Research Organisation (ISRO) has not only fulfilled the visionary leader’s dream but has also made India’s space programme the envy of the world with its ‘success on a shoestring’.

Fifty-three years later, Thumba is the hub of all space programmes helmed by the Indian Space Research Organisation (ISRO). The Vikram Sarabhai Space Centre at Thumba has given India launch vehicles, geostationary satellites (used for telecommunications, television transmission and weather forecasting) and some of the finest remote sensing satellites

As for the little church that helped India reach for the stars, it now houses a space museum replete with a fascinating array of rockets, satellites and other astronomical equipment.

Here’s a timeline of ISRO’s genesis from the 1960s to today.