Difference Between LoC and LaC, Know Everything Here - TheIndianHawk

Difference between Loc and Lac: Pakistan has been regularly doing heavy firing on the Line of Control (LoC) and the International Border.

Difference between LoC and LaC: Since the removal of Article 370, Pakistan has been regularly doing heavy firing on the Line of Control (LoC) and the International Border (IB). Prior to this, Indian and Chinese soldiers are fighting at the Line of Actual Control (LAC).

India has many border-related disputes with its neighbors China and Pakistan. Sometimes these border issues led to the escalation of war-like situations between these countries. As a citizen of India, we should know the borders of our country and the fundamental cause of disputes with neighboring countries.

In the following article, we will discuss the exact difference between LoC and LaC. Before coming to the actual point we should know the full form and meaning of LoC and LaC.

What is  Line of Control (LoC)

LoC or Line of Control is a live border line with a lot of activities like firing and face-to-face interaction. It is clearly demarcated by the militaries.

It truly denotes a kind of boundary separating parts of Indian UT i.e. Jammu & Kashmir; controlled by India and illegally occupied by Pakistan. The length of LoC is around 776 kilometers. The Indian part (southern and eastern parts of the region) of LoC is known as Jammu and Kashmir which constitutes about 45 percent of Kashmir. 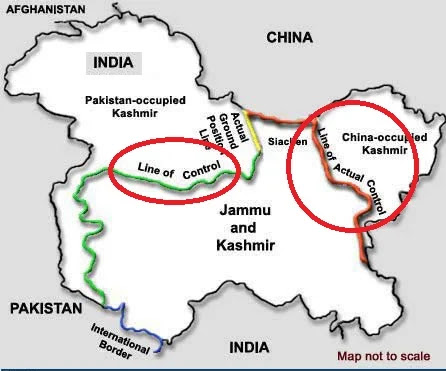 What is  Line of Actual Control (LaC)

LAC stands for Line of Actual Control. It denotes the main boundary between China and India. The concept of the “Line of Actual Control” (LAC) came in a bilateral agreement in 1993, although there was no concrete settlement on ground positions between these two countries.

The Chinese government considers LAC to be around 2,000 km while India considers the LAC to be 3,488 km long.

LAC is divided into three regions:

Now we are in a position to know the difference between LOC and LAC.

Difference between LOC and LAC;

There is no clear-cut demarcation at the LAC which is why standoffs have taken place many times like; Doklam in 2017, Chunar in 2014, Depsang in 2013, and Sumdorong Chu in 1987.

The same kind of situation exists at the LOC where the Pakistan army uses POK regions to send terrorists to India.
So the existence of border disputes is a reality in many countries around the world. Now we hope that after reading this article, you must have understood what is the difference between LOC and LAC?
#Defence #Difference Between LOC and LAC #LAC