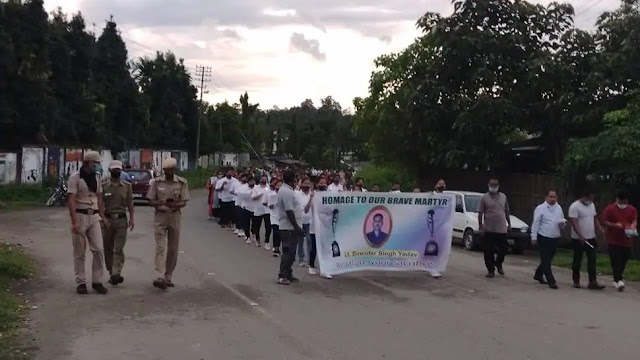 Days after an Army man was killed by insurgents in Arunachal Pradesh, a candle light march was organised as a tribute to Warrant Officer Virendra Singh Yadav of Assam Rifles who was killed in action during an insurgent attack on October 4, 2020.

The march was organised by sitting MLA Laisam Semai which saw the participation of as many as 250 residents of Jairampur. The candlelight march took place at two different locations from Jairampur Market to Assam Rifles gate in Jairampur and from Football Stadium to the Police Station in Nampong on Friday.

The police said they suspect around 30 insurgents of the Paresh Baruah faction of United Liberation Front of Assam (ULFA-Independent) and the Yung Aung faction of the National Socialist Council of Nagaland (NSCN-K) were responsible for the ambush on October 4.

The locals are reportedly unhappy about the barbaric act of the insurgents groups and have pledged their support to the security forces who have been striving hard for long to maintain peace in the region.

The insurgents groups which are active across India's northeast states and at the Indo-Myanmar border are taking advantage of the large scale of unemployment due to the outbreak of the COVID-19 pandemic and are conspiring to recruit more youth into their outfits.

A large number of NSCN (K) cadres have congregated at the Indo-Myanmar Border across the Mon area (Nagaland) with a motive to carry out attacks on security forces.