Armenia and Azerbaijan have agreed to a ceasefire starting from 12:00 on Saturday, they will now exchange prisoners and bodies of those killed in war. 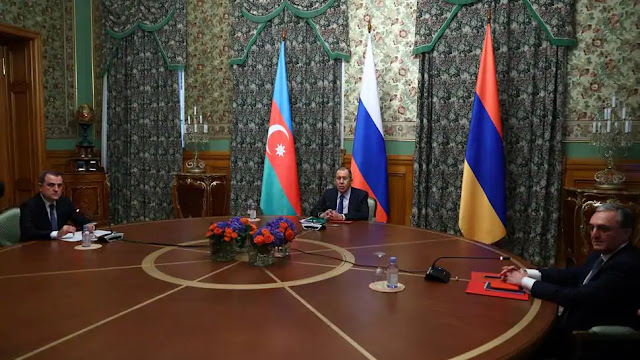 New Delhi: Armenia and Azerbaijan have agreed to a ceasefire starting from 12:00 on Saturday, they will now exchange prisoners and bodies of those killed in the conflict, the Russian Foreign Minister Sergei Lavrov informed as per a report by Reuters.

He made the statement after a 10-hour-long talk with his Armenian and Azeri counterparts in Moscow around 3:00 in the morning local time. Lavrov also said Armenia and Azerbaijan agreed to start talks on the settlement of the conflict.

This announcement is the result of international efforts trying to stop the war which has killed at least 400 people since it broke out on September 27.

The war broke out over claims to the Nagorno-Karabakh region which belongs to Azerbaijan under international law but broke away in a war when the Soviet Union collapsed. It is populated and governed by ethnic Armenians.

On Thursday, the Kremlin had said that the foreign ministers of Azerbaijan and Armenia had been invited to take part in talks in Moscow on Friday, informing that the invitation was followed by calls to the leaders of the two nations.

"Following a series of telephone discussions with the President of Azerbaijan Ilham Aliyev and the Prime Minister of Armenia Nikol Pashinyan, the President of Russia calls for a halt to military actions in the Nagorno-Karabakh conflict," the Kremlin had said in a statement, the Reuters quoted.

Russia`s foreign ministry said earlier on Thursday that it was in talks with Azerbaijan and Armenia to organise a possible meeting in Moscow.