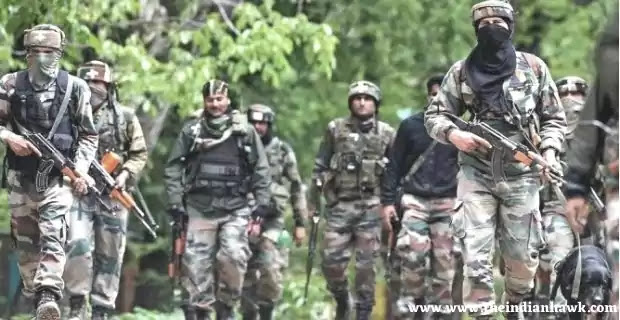 On Monday, five troops, including a junior commissioned officer (JCO), were killed in an exchange of fire with highly armed militants in Surankote, Poonch district, Jammu and Kashmir (J&K).

On Monday, five troops, including a junior commissioned officer (JCO), were killed in an exchange of fire with highly armed militants in Surankote, Poonch district, Jammu and Kashmir (J&K).

The exchange of fire in Poonch occurred during a cordon and search operation conducted early Monday morning in response to intelligence reports of the presence of four to five terrorists in a wooded region near the Line of Control (LoC), or the de facto boundary between India and Pakistan, in J&K. 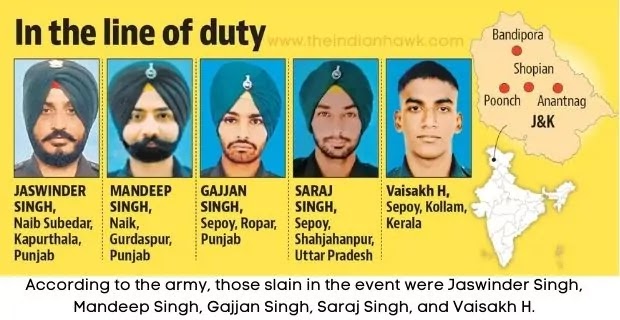 "A JCO and four Indian Army personnel were critically injured in the subsequent shootout during the continuing engagement with militants." "The seriously injured were transported to the nearest medical institution, unfortunately they died as a result of their injuries," army spokeswoman Lt Col Devender Anand said. He went on to say that more troops had been dispatched to the region.

In October, just before the arrival of winter, there is generally an upsurge in infiltration efforts, with terrorist handlers in Pakistan attempting to smuggle more of them into India before crossing the already difficult terrain becomes nearly impossible.

According to the army, those slain in the event were Jaswinder Singh, Mandeep Singh, Gajjan Singh, Saraj Singh, and Vaisakh H.

The last time security forces sustained substantial fatalities was in May 2020, when five of its troops were killed in an 18-hour anti-insurgency operation in the Handwara district of Kashmir valley, including a Colonel and a Major.

Following intelligence inputs, security personnel started a cordon and search operation at Khagund in Anantnag district's Verinag region earlier in the day, according to an official. According to him, the search escalated into an encounter after the terrorists opened fire on the security personnel, who reacted. The firefight resulted in the death of one terrorist and the injury of one police officer.

A Lashkar-e-Taiba terrorist was killed in another gun fight that erupted at Gundjahangir in Bandipora district's Hajin region. "The assassinated terrorist has been identified as Imtiyaz Ahmad Dar, a member of the blacklisted terrorist organization LeT." (TRF). He was engaged in a recent civilian killing in Shahgund Bandipora," said the Inspector General of Police.