Uzbek troops have learned how to handle Sig Sauer assault rifles from the Indian Army troops during the counter-terror operations drills... 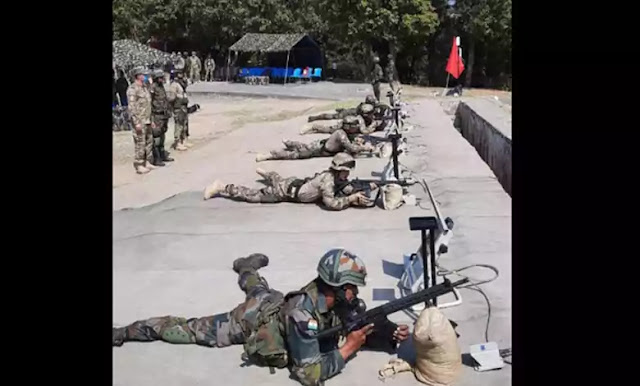 Uzbek troops have learned how to handle Sig Sauer assault rifles from the Indian Army troops during the counter-terror operations drills at the Foreign Training Node in Uttarakhands Chaubatia. The exercise is named as ‘Dustlik’ and it is the second edition.

Colonel Amit Malik, Commanding Officer of of 13 Kumaon Regiment known as the Rezang La Battalion famous for its heroics in the battle of Rezang La in the 1962 war with China, told IANS: “At present Uzbekistan troops are learning firing from Sig Sauer assault rifles. Both the contingents are sharing best practices with each other.”

On a large scale, the Uzbek military use the Russian-made AK 47 and AK 74 rifles.

From last year, the Indian Army started using the Sig Sauer rifles after New Delhi procured 72,500 of them from the US under fast track procedures.

The government has also ordered second batch of the 72,500 Sig Sauer, which is a compact 7.62×51 mm assault rifle.

The American assault rifles are manufactured at the Sig Sauer’s New Hampshire facilities.

The new rifles replaced the existing Indian Small Arms System (Insas) 5.56x45mm rifles used by the forces and manufactured locally by the Ordnance Factories Board.

The imported rifles are used by the troops in the counter-terrorism operations and frontline duties on the Line of Control (LoC) and Line of Actual Control (LAC).