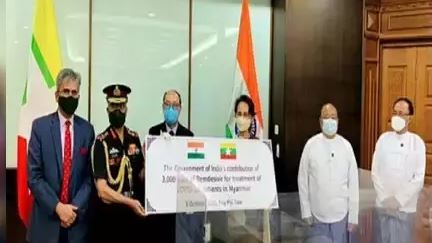 "The two sides discussed maintenance of security and stability in their border areas and reiterated their mutual commitment not to allow their respective territories to be used for activities inimical to each other," said a press release issued by the ministry of external affairs.

Myanmar is one of India's strategic neighbours and shares a 1,640-km-long border with a number of northeastern states including terrorism-hit Nagaland and Manipur.

India has been concerned over some terrorist groups from the North-East region taking shelter in Myanmar. The country has been assuring India that it would not allow any insurgent group to use its territory against India.

In June, 2015 the Indian Army had carried out an operation in areas near the Indo-Myanmar against the NSCN (K) terrorists, days after the ultras had killed 18 Army men in Manipur.

The two countries have significantly ramped up defence and security cooperation in the last few years including in the maritime security sphere.

Shringla said Myanmar's handing over of 22 Indian insurgents has been deeply appreciated by India and sends a strong message of "deterrence to inimical elements on both sides."

Their visit to Myanmar assumes significance as it comes in the midst of the Indian Army's bitter border standoff with the Chinese military in eastern Ladakh as well restrictions on foreign visits due to the coronavirus pandemic.

It is Gen Naravane's first visit to any foreign country after he took charge as the Chief of Army Staff on December 31 last year.

During their visit, India announced a grant of $2 million for the construction of the border haat bridge at Byanyu/Sarsichauk in Chin State that will provide increased economic connectivity between Mizoram and Myanmar.

A quota of 1.5 lakh tonnes of Urad (Vigna mungo) for import from Myanmar till March 31, 2021 was also announced.

"The visit provided an opportunity to review the sustained progress in bilateral relations which have been marked in recent years by regular high-level visits and interactions,” the release said.

"Both sides agreed to further strengthen their partnership in connectivity projects, capacity building, power and energy, deepen economic and trade ties, further facilitate people to people and cultural exchanges, and broad-base their defence exchanges across all the three services," it added.

Both sides agreed to work towards operationalising the Sittwe Port by the first quarter of next year and that the tendering process for 69 bridges proposed under the ambitious India-Myanmar-Thailand trilateral highway will begin soon.

Sittwe Port is part of the Kaladan multi-modal transit transport project which is being viewed as India's gateway to Southeast Asia. The port will connect India's landlocked northeastern region with the Bay of Bengal through Mizoram.

They exchanged views on an early initiation of work on fresh initiatives such as the upgradation of Yamethin Women's Police Academy, Basic Technical Training School and measures to provide long term sustainability to projects such as the Myanmar Institute of Information Technology.

Both sides noted the considerable progress made under the Rakhine State Development Programme and proposed finalising projects under Phase-III of the Programme, including setting up of a skills training centre. The two sides signed an agreement on the upgrading of agricultural mechanisation.

The two sides discussed plans to install a bust of Lokmanya Tilak in Mandalay to commemorate his 100th death anniversary as it was during his incarceration in Mandalay jail that he wrote Gita Rahasya.

In the last few years, both countries have made commendable strides in bilateral ties and explored new avenues of cooperation including fresh investments in oil and gas and power, infrastructure and pharmaceuticals.

The two sides have been in discussion to establish a High Capacity High Voltage Grid Interconnection between the Indian power grid and the Myanmar grid. "Discussions on the low voltage radial interconnections between North-Eastern states and Myanmar have also progressed. The cooperation in the maritime domain and disaster management has been enhanced," it said.

It said initiatives like the successful implementation of the Land Border Crossing Agreement and ongoing discussions at the India-Myanmar-Thailand Trilateral Motor Vehicles Agreement, have been moving forward.

The Centre of Excellence in Software Development and Training in Myitkyina, was virtually inaugurated.