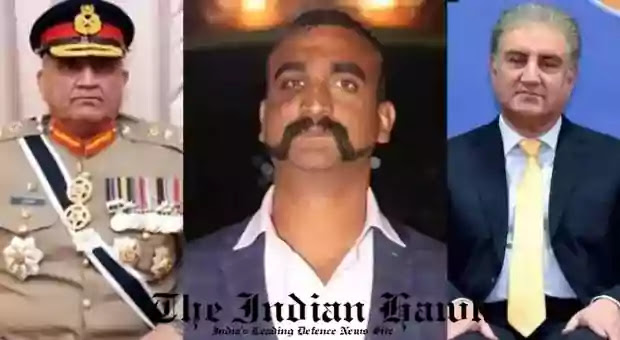 NEW DELHI: Pakistan army Chief Qamar Javed Bajwa's "legs were shaking" as foreign minister Shah Mahmood Qureshi urged to release Indian pilot Wing Commander Abhinandan Varthaman who was captured after his jet was shot down during a standoff with India in 2019, a country's lawmaker claimed on Thursday.

"I remember Qureshi was in the meeting in which Imran Khan had refused to attend and chief of army staff General Bajwa came into the room, his legs were shaking and he was perspiring. Foreign minister said for God's sake let Abhinandan go, India's about to attack Pakistan at 9 PM", Pakistan Muslim League-N (PML-N) leader Ayaz Sadiq said the in National Assembly.

Pakistan-based Dunya News further quoted Sadiq as saying that the opposition has supported the government in all issues including Abhinandan but will not be able to further support it.

PML-N leader Sadiq was responding to allegations by the government of his party "colluding" with PM Narendra Modi.

"I try not to make any personal attacks but when those in power refer to us as thieves or ‘Modi ka yaar’, we will have to respond," Sadiq was quoted as saying by Dunya News.

Sadiq's remark came at a time when his party is lodged in a vocal slugfest with the country's powerful armed forces.

An alliance of 11 opposition parties led by PML-N has been organising a series of rallies against the government, which it calls "puppet regime" "selected" by the country's armed forces.

BJP president JP Nadda tweeted a video of Sadiq's remark in the National Assembly to target the Congress party.

"The shehzada of Congress has no belief in India -- be it the Army, the government, or our people. They should perhaps listen to their most trusted friend Pakistan. Hopefully, they will wake up now," Nadda tweeted in Hindi in an apparent dig at Congress leader Rahul Gandhi.

He added that the Congress party was focussed on weakening its own armed forces.

"Either they make fun of them, or they will doubt their bravery. They tried to their best to ensure that India doesn't get the Rafale fighter jet. However, the people of this country has taught a lesson (to the Congress party) by defeating such politics," he tweeted.

Wing Commander Varthaman was captured by Pakistan soldiers after he shot down a Pakistani aircraft F-16, which had transgressed into the Indian airspace during a dog fight between Indian and Pakistani air forces on February 27, 2019 and in the process, his plane crossed over to Pakistani side and was shot down.

Abhinandan was returned to India from the Attari-Wagah border on March 1, 2019. He has been awarded the Vir Chakra on Independence Day by President Ram Nath Kovind for his exemplary bravery.