As Rafales Join IAF, All You Need to Know About 'Golden Arrows' Squadron That Will Fly the Jets

The 17 Squadron ‘Golden Arrows’ has many firsts to its credit; in 1955 it was equipped with the first jet fighter, the legendary De Havilland Vampire.
As The Indian Air Force formally inducts the Rafale aircraft on Thursday into the ‘Golden Arrows’, here's a look at the Ambala-based squadron that will fly these fighter jets. The Golden Arrows was formed in 1951. It was disbanded in 2016 after the Air Force began to phase out MIG-21 which was then being operated by the Golden Arrows.

However, in 2019, the squadron was resurrected in Ambala for Rafale jets and five fighter jets were included in the squadron. 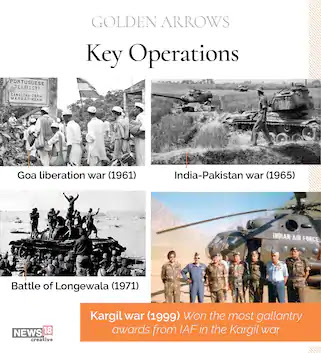 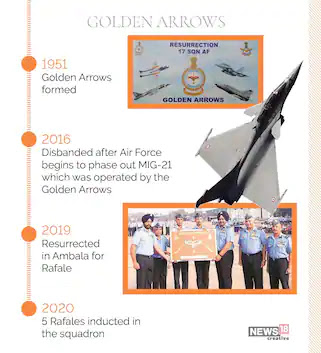 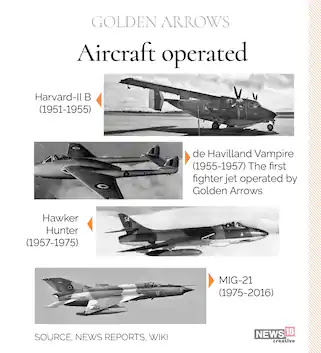 The first batch of five Rafale fighter jets will be formally inducted into the Indian Air Force on Thursday at the Ambala airbase at a time India is engaged in an escalating border row with China in eastern Ladakh. A galaxy of dignitaries, including Defence Minister Rajnath Singh, his French counterpart Florence Parly, Chief of Defence Staff Gen Bipin Rawat, Air Chief Marshal RKS Bhadauria and Defence Secretary Ajay Kumar, attended the ceremony.


The Rafale jets, produced by French aerospace major Dassault Aviation, are known for air-superiority and precision strikes. IAF Spokesperson Wing Commander Indranil Nandi said a traditional water cannon salute will be given to the fleet before its ceremonial induction into the 17 squadron of the force.

The first batch of the five jets arrived in India on July 29, nearly four years after India signed an inter-governmental agreement with France to procure 36 of the aircraft at a cost of Rs 59,000 crore. The French delegation at the ceremony will include French envoy Emmanuel Lenain, Air Gen Eric Autellet, Vice Chief of French Air Force, Chairman and Chief Executive of Dassault Aviation Eric Trappier and CEO of missile maker MBDA Eric Beranger.