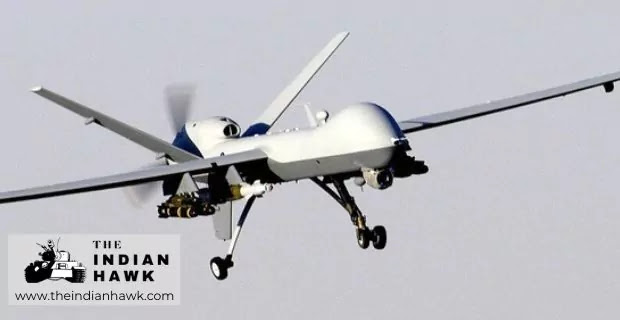 New Delhi: Indian Navy to approach the Defence Acquisition Council (DAC) for probable announcement of the $3 billion acquisition of armed Predator drones from Washington to improve India's beyond the horizon capabilities, with the two-plus-two conversation set for December.

Defence Minister Rajnath Singh and External Affairs Minister S Jaishankar are expected to meet their US counterparts, Secretary of State Antony Blinken and Defense Secretary Llyod Austin, in December in Washington, according to sources in New Delhi and Washington.

While the stabilization of the drought in Taliban-ruled Afghanistan and the Indo-Pacific in light of China's aggressive postures would be top of the agenda, the two sides may announce the Predator contract if the necessary government processes are completed.

The Indian Navy is expected to move the DAC for Acceptance of Necessity (AON) for the purchase of 30 MQ 9A Predator drones from General Atomics, with 10 Hell-Fire missile-firing drones going to each of the three services. The procurement process is being managed by the Indian Navy, which already operates two leased Predator drones for maritime domain awareness beyond the Malacca Straits to the Gulf of Aden.

“The procedure is in progress. After DAC approval, it must be approved by the Cabinet Committee on Security (CCS). The announcement can be made if the procedure is completed before the two plus two discussion; otherwise, it will be made later," she stated a top South Block official with the Indian Navy confirming that the US had clarified to their satisfaction about the project.

During his visit to Washington on September 23, Prime Minister Narendra Modi met with the CEO of General Atomics.

In light of the United States' recent approval to utilize Pakistani airspace to retain beyond-the-horizon capabilities to target terrorists in Afghanistan, India must likewise boost its drone capabilities, as the country's domestic development of armed drones still has a long way to go. “ Pakistan's denial of permitting the US to utilize its airspace for beyond-the-horizon operations in Afghanistan, like its denial of the existence of al Qaeda commander Osama bin Laden in the past, must be taken with a grain of salt.

The presence of US special forces in Pakistan after the 9/11 attacks was one of the main reasons why the US did not want India to retaliate to Islamabad after the Parliament and Kaluchak terror strikes. "This was conveyed to India in 2002 by then-defense secretary Donald Rumsfeld," a Pakistan analyst claimed.

With China not only obtaining the capability, but also selling the Wing Loong armed drone to Pakistan, which can launch up to 12 air-to-surface missiles, India's need for Predator armed drones has intensified.

Islamabad is a staunch ally of the United States. Turkey has also developed the capability of using armed drones, with the Bayraktar line of drones being employed in Libya and Syria, as well as by Azerbaijan against Armenia in the 2020 Nagorno-Karabakh conflict.