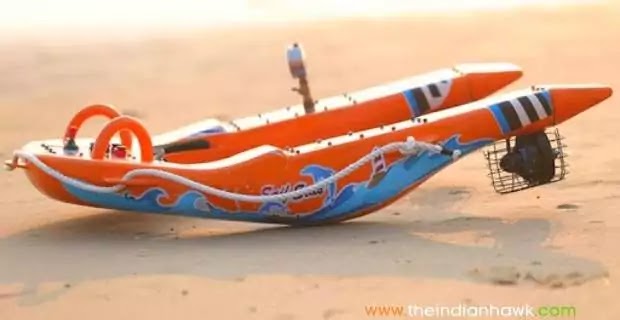 New Delhi: Autonomous robot lifebuoys are outfitted with sensors and electrical equipment that allow them to identify a stranded person in the water and autonomously head out to them.

Saif Seas, a Visakhapatnam-based start-up, was awarded the contract.

Autonomous robot lifebuoys are outfitted with sensors and electrical equipment that allow them to identify a stranded person in the water and autonomously head out to them.

It was created in India as part of the Innovations For Defence Excellence (iDEX) challenge "Unmanned Surface Vehicles."

Defence Secretary Ajay Kumar praised iDEX's efforts. “IDEX is revolutionizing Defence innovation,” he added, “creating new tech solutions at a fraction of the cost and quarter of the time.” He referred to the creation of indigenously built Robotic Lifebuoys as "the biggest success story of Atmanirbhar Bharat (Self Reliant India).

After winning the competition, Saif Seas promoter Aliasagar Calcuttawala remarked on social media, "IDEX has provided us with a launchpad to launch into the greater orbit of success."

According to the defence ministry, iDEX provides a forum for many stakeholders in the defence and aerospace industries, basically functioning as an umbrella organization to monitor technological development and possible collaborations in the specific field.

The problem statements, which are intended to secure military superiority in the near future, are the greatest in any edition so far.

“The entire thinking process of IDEX and the program is not just to build prototypes appropriate for use in the Indian Defense Industry, but to grow defence innovation partners and the defence industry with the support of start-ups, aiming towards greater Make in India,” he explained.