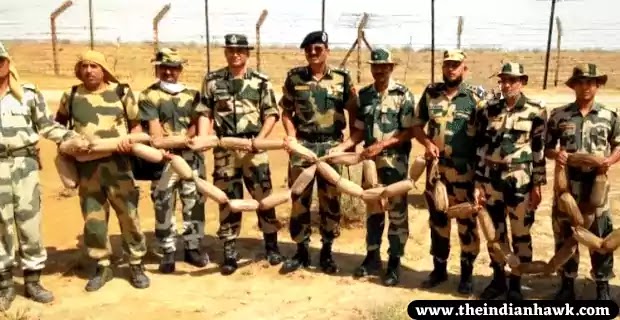 The Border Security Force (BSF) seized at least 56 kg of heroin, the largest-ever amount recovered along the India-Pakistan border in Rajasthan, after foiling an alleged narcotics-smuggling attempt by Pakistani operatives.

The drug-seizure operation was carried out by the 127th Battalion of BSF near Khajuwala area on the Indo-Pak International Border (IB) in the Bikaner Sector.

In a tweet, BSF Rajasthan informed that after sensing suspicious movement on the border, the sentry opened fire and forced smugglers to run.

Following search operations, the BSF recovered 56 kg, 630 grams (54 packets) of contraband items suspected to be heroin from the incident site.

“It is the largest narcotics seizure ever in Rajasthan Frontier's jurisdiction. In addition, smugglers' footprints have been discovered near the site,” said an official.

Despite the pandemic, drug smugglers have continued to operate their drug trade. The modus operandi is to send these neatly tied packets across the border fence through a pipe, which was also done in this case.

“Despite the seizures, the smugglers fled, taking advantage of the dark night and bad weather,” said BSF Spokesperson Krishan Rao.

Although Punjab has seen the most drug smuggling cases, Rajasthan is also a popular route for smugglers. Three cases of drug smuggling have been reported in Bikaner. Earlier this year, on the intervening night of February 7-8, the BSF foiled a smuggling attempt under the Rajasthan Frontier in Sriganganagar. Previously, in March 2021, the BSF Rajasthan foiled two infiltration attempts at the Indo-Pak international border in Bikaner, killing two Pakistani intruders.

BSF seized 247.545 kilograms of heroin in the first five months. With the most recent seizure of 56 kilograms, the recovery has surpassed 300 kilograms.