For the Diaspora, Ties That Bind — and Divide - The Indian Hawk 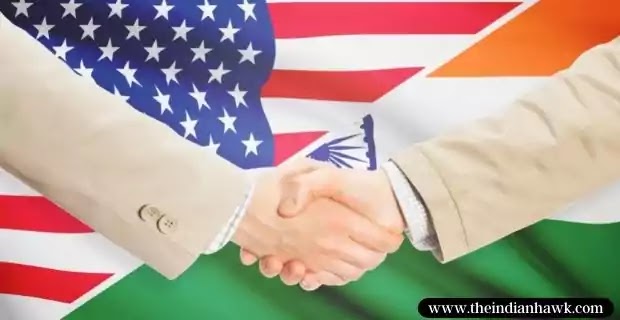 One of the most heartening aspects of India’s heartbreaking struggle with the deadly second wave of the Covid-19 pandemic has been the outpouring of support from the Indian diaspora.

In the United Kingdom (UK), an independent Gofundme campaign organised by British Indians exceeded its initial goal of raising £160,000 to purchase 200 oxygen concentrators in just one day. The India Philanthropy Alliance — comprising 14 diaspora groups in the United States (US) working toward humanitarian and development goals in India — has raised millions of dollars in Covid relief. Such stories, from a range of countries where Indian immigrants have settled in large numbers, are legion.

Our research on Indian-Americans, now the second-largest immigrant group in the US, suggests that the ties that bind the diaspora to their homeland are resilient, even among members of the second generation who may lack the direct connection of their parents to their ancestral homeland. But these feelings of solidarity simultaneously coexist with forces that can increase estrangement — including some that originate from within India itself. In a previous column in these pages (On India, a fracture in the diaspora; February 10), we warned that the Indian-American community is increasingly divided into political, religious, and generational lines. Political polarization in India had not stopped at the water’s edge; it has been exported to the US.

In our most recent study — drawing on the findings of the Indian American Attitudes Survey (IAAS), a nationally representative survey of Indian-Americans we conducted in September 2020 — we dig deeper into the social realities of the Indian-American diaspora. Once more, the warning signs of polarization are evident. Fortunately, at an individual level, religious polarisation among diaspora members of different faiths is less pronounced than one might fear. But partisan polarisation linked to political preferences both in India and the US is rife.

Individuals associated with opposing political camps are much less comfortable fraternising with one another than with members of their own “tribe”. Interestingly, this polarization is asymmetric: Indian- Americans who identify as Democrats are much less comfortable having close friends who are Republicans than the converse. The same is true of Congress supporters vis-à-vis supporters of the Bharatiya Janata Party (BJP). How much of this has to do with structural factors as opposed to transient forces such as the leadership of Donald Trump and Narendra Modi remains an open question.

For those who perceive that polarisation in India is negatively impacting the diaspora, religion, political leadership, and political parties are identified as the primary culprits (figure 1). Many of these factors are inextricably linked. For Indian-Americans who view the rise of Hindu majoritarianism in India sceptically, for example, it is unclear how they might apportion blame given that religion, leadership, and political parties are all deeply intertwined. 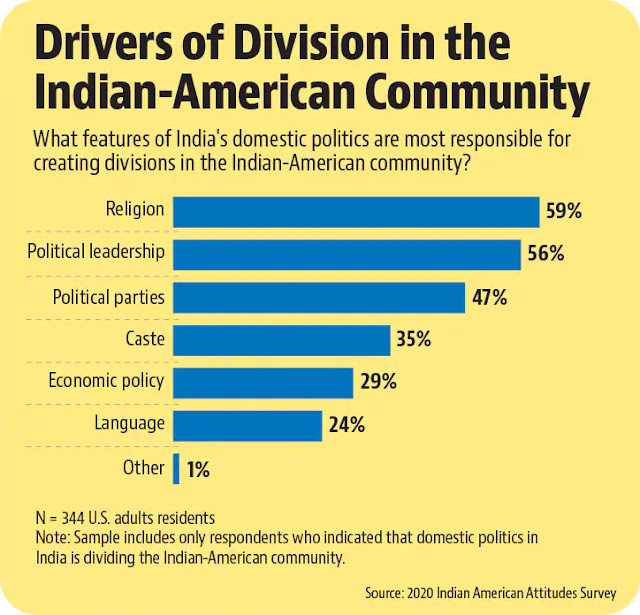 Where does this leave the Indian-American community and its role in promoting US-India relations? Divisions in the community are manifest and are often linked to political disputes in India, potentially weakening the diaspora’s cohesion. However, recent events suggest that while we should be clear-eyed about the fissures within the Indian diaspora and the manner in which India’s raucous politics may be fuelling them, we should not overstate the nature of the threat.

Large majorities of both foreign and US-born Indian-Americans say being Indian is important to them. For more than two decades, the Indian diaspora in the US has been a critical bridge-builder between the two countries. Indeed, the community remains bullish about the future: 70% state that they think that the Indian-American community has a positive impact on US-India relations.

In fact, it is worth noting that many of the same diaspora leaders in America, including progressive Members of Congress such as Pramila Jayapal and Ro Khanna, once vilified by some in the Indian government for their criticism of the Modi regime, have been among the most forceful in urging the Joe Biden administration to come to India’s aid.

Diaspora leaders who oppose many of the present Indian government’s policies have picked up the phones, badgered their elected representatives, and catalysed tweetstorms urging the US government to act. Many Indian-Americans are nervous about India’s political trajectory — slightly more Indian-Americans believe the country is on the wrong track than those who believe it is headed in the right direction — but their anxieties are not reflective of a broader anti-India sentiment. The vast majority of IAAS respondents state they are both pro-India and critical of the government’s policies. To quote Abraham Lincoln, “he has a right to criticize, who has the heart to help.”

Therein lies an important lesson, for home and abroad. Treating disputes based on policy or politics as indicative of animosity toward India is not only inaccurate, it is unwise — continuing down this path risks creating a self-fulfilling prophecy.

The views expressed are personal