Terrorists Encounter In Arunachal: Jawan Killed While 2 Others Injured 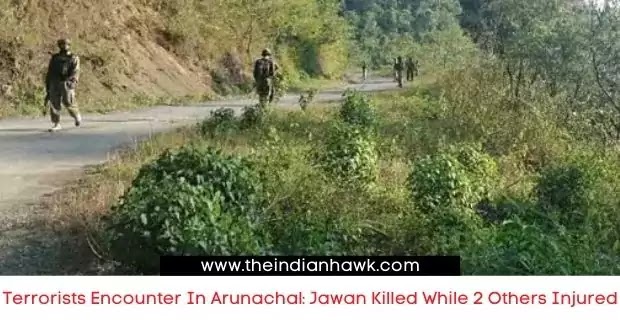 Guwahati: A trooper of the Assam Rifles paramilitary force was killed and two others were injured in an encounter with terrorists believed to be members of the National Socialist Council of Nagaland (Khaplang-Yung Aung) in Changlang district of Arunachal Pradesh on Saturday.

"One Assam Rifles jawan was Killed-In-Action and two others injured in an encounter between security forces and militants at Longvi village under Nampong circle in Changlang district of Arunachal Pradesh," Changlang Deputy Commissioner Devansh Yadav said.
He said the injured Jawans were airlifted and taken to the army hospital.
The district chief said that security forces have launched a massive counter-insurgency operation to flush out the terrorists from the area.
"A column of Assam Rifles was launched to carry out an operation around 9 am. Suddenly, the soldiers came under heavy firing in which the Jawan was martyred after receiving bullet injury," said a police source.
The encounter took place around 8 km from Longvi village under Nampong circle in Arunachal Pradesh.
Various factions of the National Socialist Council of Nagaland or NSCN have been among the outfits based in the northeast that have waged guerrilla war for six decades against central rule by New Delhi.
In 2015, the central government signed a framework peace agreement with the largest of the groups - the NSCN-IM - following a dialogue that began in 1997. The truce, however, ran into turbulence last year but the group has recently said talks were back on track.
Source