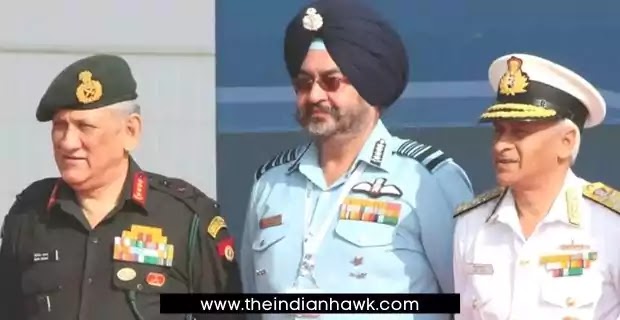 Gone are the days when battles dragged on for years. Now battles are instant. It's all about striking swiftly and stealthily. And to do this, you need instant decision making and state-of-the-art weaponry.

How does the chain of command work in India? Is there scope for improvement? And what about our weapons? Can they keep up with the rest of the world?

India's defence is split into three services. The Air Force the Navy and the Army. They have their own headquarters bases and leadership. It's been this way for decades.

But this system has drawbacks. There is a lot of duplication of work and unnecessary bureaucracy.

For example, Indian airspace is defended by all three services. They are tracking threats on separate frequencies with their own radars.

But every army headquarters is located next to an airbase. So two agencies are doing the same work sitting right next to each other. - talk about the wastage of resources and manpower.

If Army, during a combing operation, wants some air support, the in-charge calls up the Air Force.

The Air Force will then churn this request through its ranks. The problem here is clear. The person in charge of the operation does not have complete control over the assets.

This was the story every time India went to war. The Air Force had its own plan. And the Army was doing its own thing.

But modern war machines cannot function like this. And India is realising it. The defence establishment is moving towards what is called "Theaterisation". This is how the US and China organise their forces.

In India, there's a talk of five commands - the northern command to deal with China, the western command on the Pakistan side, peninsula command in southern India, a maritime command to patrol the seas and an air defence command to protect the airspace.

So how is this different from the current set-up? The commands are unified establishments. This means the army the navy and the air force will function together under one command. No more shuttling between agencies for orders. All three services will answer to a single commander. In military circles they call this jointness and integration.

India cannot underestimate the mindset problem. The three services are used to autonomy. Both the Air Force and Navy fear the army will dominate joint commands. This could lead to a turf war, a territorial battle for assets, funds and for influence.

The other big challenge is logistics. If you appoint a commander what happens to the chiefs of staff? Do the soldiers still report to them? Or will commanders take over operational control?

Same is the thing with assets. The air force only has 31 squadrons. Can they spread their assets wide enough to support every command? These are some of the big challenges to joint theatres.

The US has a tried and tested the system.

But India cannot copy it. India's tri-service chief has ruled this out. Chief of Defence Staff Bipin Rawat says India will develop its own system of joint theatres.

The military is tight-lipped about the plans. But reports say they should be operational by next year. Hopefully, this will solve the bottlenecks in decision-making.

An army is only as good as the weapons it has. This is where India has struggled in the past with outdated weapons aircraft and ships. The only way to overhaul this is through defence spending. Now on paper, India is the third largest spender in the world behind the US and China.

A break-up of India's defence budget shows that 50 per cent of the funds go to salaries and pensions. So at the start of every month half the money is already gone. Where does that leave India's modernisation plans? These are figures from this year's budget. The total allocation was 4.78 lakh crore Rupees.

After pensions, salaries and other expenses, 1.35 lakh crore Rupees were left. Just 28 per cent of the total budget.

For a country with two belligerent neighbours this is simply inadequate.

What Are India's Options?

One, is to keep expanding the defence bill. But as this pandemic has shown India needs to put more money in public health and infrastructure. So a big defence bill could be highly unpopular.

What about reforming pensions? Maybe extend the retirement age of officers? Every time someone suggests this there is backlash from veterans. And the situation isn't getting any better. We need active deployments in the east and west. Which means more soldiers more salaries and more pensions. Where will the money come from?

A viable option is to trim the loose ends. Streamline acquisitions, cut down on duplication of work.

Right now, every service has its own wish list. There is no synergy between them on acquisitions. The goal is to get them all together so that India's defence establishment has one wish list not three.

All of this is easier said than done. The bureaucrats are sure to oppose a unified command. They hate being side lined. Also, we need to be ready for squabbles between generals, admirals and air marshals.

But these worries shouldn't concern India much because unification of command is like a rebirth for the military. Every big power has gone through it and and they are better off with the new system.